By William Shakespeare; Directed by Eric Tucker
Produced by Bedlam 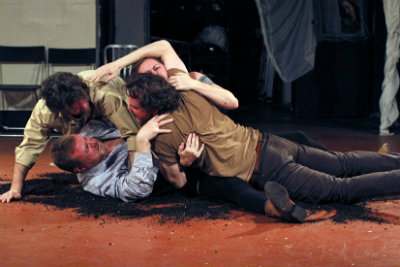 The actual story of Hamlet isn’t too complicated: Hamlet’s father is murdered; his father's ghost tells Hamlet that the murderer is his uncle, who recently married Hamlet's mother; Hamlet seeks revenge. The brilliance of Hamlet is in Shakespeare’s exploration of passion and madness, both real and feigned, that fills the three and a half hour piece and makes this play perhaps Shakespeare’s greatest drama. Passion and madness drive the four actors of Bedlam’s production of Hamlet, creating captivating performances that make for a fun, engaging evening.

Upon entering the theatre the audience is asked to sit on stage facing the seats. From then on the piece continues to surprise as it utilizes the theatre in inventive and unpredictable ways. Director Eric Tucker (also playing Hamlet in this production) has an impeccable vision for stage pictures, using only four chairs and a picture frame in the second act to create the various locations within the palace in Denmark. Tucker and the ensemble craft some brilliant solutions to the challenge of only having four actors on stage at any time, including something I will call here ‘character transferring.’ For instance, when Andrus Nichols plays Gertrude in the third act but then transfers the mannerisms/vocal qualities to Ted Lewis in order for her to portray Ophelia in a scene where both characters are present. Bedlam’s production is full of twists and turns like these that at times make the audience gasp with delight at the creativity of the cast’s choices.

Every member of the ensemble is so full of energy it is impossible not to be captivated by his or her every movement. Tom O’Keefe’s Claudius is bold and conflicted, Nichols’s Ophelia is full of tragic naivety and Lewis’ Polonius is pompous in just the right way. All this being said, it is undeniably Eric Tucker’s portrayal of Hamlet that makes this production as powerful as it is. Tucker takes the character through a myriad of emotions, all while maintaining a sense of control that causes you to question how much of Hamlet’s eventual madness is real. At times Hamlet lets his inner turmoil slip and we catch a glimpse of his rage, as in Tucker’s fiercely delivered “Oh what a rogue and peasant slave am I” soliloquy. Nothing is ever over-acted as Tucker manages a balance of give and take with the text that makes the audience excitedly anticipate every word. This superb performance of Shakespeare’s most tragic character alone makes this production a must see.

The impressive use of space, which I won’t go into detail here to avoid spoilers, and imaginative exploration of the actors within that space is simply profound. Direction, design, and performance come together magnificently to present a fantastic version of this play. Combine all that with Shakespeare’s already brilliant masterpiece and you have an incredible production. Bedlam’s Hamlet is a rollercoaster of high-energy, emotional powerhouse performances that you don’t want to miss.

(Hamlet plays at Access Theatre, 380 Broadway at White Street, through April 7, 2013. Performances are Mondays at 8PM; Wednesdays through Saturdays at 8PM; and Sundays at 3PM. Tickets are $30 and are available at www.theatreBEDLAM.org or by calling 866-811-4111.)