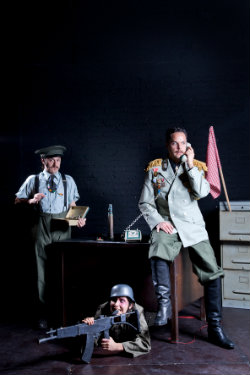 BOTTOM LINE: War? What is it good for? 55 minutes of tragic hilarity.

War's the butt of a joke we've seen before: war and comedy woven so tightly together that we seem to forget where the comedy ends and the tragedy begins. From the very first sounds of boots marching, we are taken hostage. We aren't just watching this play, we are in the front lines.

Guerra: A Clown Play is part of Flint and Tinder's series of innovative theatrical performances from around the world. Guerra is in three different languages and combines — you guessed it — clowning with delightful elements of slapstick, dance, song, bouffant, and farce. Created by Devon de Mayo, Seth Bockley, and La Piara (the "group of pigs" who perform it), the play is delightfully simple and clever. I felt I was watching children play: it was spontaneous, the commitment was absolute, the playfulness contagious, and the result rewarding.

A duo of dedicated, yet highly incompetent officers do a series of meaningless tasks in the last stand of their military outpost. Artús Chávez Novelo leads the group of clowns, eh, I mean, soldiers, with power and dignity. He is proud, ridiculous, and hilarious. His version of "My Way" is — just like with everything he does — done in his own bizarre and fascinating way. His assistant, friend, and masseur, Fernando Córdova Hernández, plays a endearing tramp-like officer with a passionate desire to earn medals. Every amusing task he does is for the soul purpose of obtaining them.

The two men play well off each other and are seen in stark difference to the soldier they recruit: a woman (Madeleine Sierra Carrascal) joins the group, sparking a great clown show-off by Córdova and Chávez. It is no surprise that her arrival brings change. Forced into the bloody war, she brings word of the outside world. Each time she enters the stage, she is more and more disfigured and has seen more and more "terrible things." With the new recruit we see the truth and absurdity of it all.

The spontaneous use of song (bravo, Nick Keenan) is deftly used. "Alouette" (the French children's song) is intense and shocking. The soldiers sing and dance in order to make the new recruit feel better and we see and hear the toll war has taken on her. This "children's" song about plucking the feathers from a lark leads the recruit into a spiral of amazing madness. Carrascal's unique specificity of movement and sound takes us on an amazing journey. We laugh as she completely loses control and suddenly we begin to understand how awful her situation is.

Like the classic gin and vermouth, war and comedy go so well together. Examples like The Great Dictator, Bananas, and Dr. Strangelove use this not-so-secret weapon to fight back. It seems to be the best weapon we have. The creators of Guerra use this weapon well as the play is playful, thoughful, and poignant. It is done with such simple honesty and with so many clever elements I'd happily go to the front lines with them.

(Guerra: A Clown Play, created by Devon de Mayo, Seth Bockley, and La Piara plays at The Tank, 151 West 46th Street, between 6th and 7th Avenues, 8th Floor, through July 21, 2013. Tickets are $15 and can be purchased at guerra.brownpapertickets.com or by calling 212-563-6269. For more show info visit flintandtinder.thetanknyc.org.)