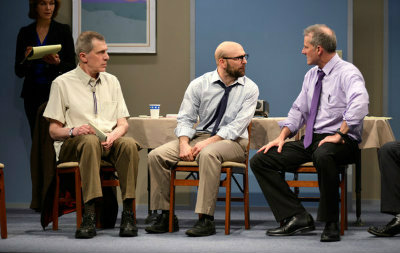 BOTTOM LINE: This play's exploration of the power struggles within the corporate world remains engaging, thanks in part to a talented cast.

In recent years we have seen women rise to the top of corporations in industries not normally dominated by women. In Scandinavian American Theater Company’s production of Gorilla, playwright Rhea Lehman explores what happens when women have the corporate power. Do they rule as ruthlessly as their male peers? Or do they try to pass on compassion and nurturing in their management styles? According to the characters in Gorilla, women in positions of corporate power do both: encouraging closeness and sensitivity but also ruthlessly slicing away unnecessary staff.

Lillian (Jennifer Dorr White) takes the employees she manages on a leadership retreat to try to improve the poor performance of her department. During the retreat she focuses on bonding by having the men report on the most important moment in their lives (one man’s presentation involves a slideshow of his wife giving birth) and how their mothers described them as children. As the bonding activities unfold further it becomes apparent that Lillian wants to shatter the cold heartlessness that the corporate environment has encouraged. She later becomes upset when the men can’t even handle the challenge of holding hands together. However, despite her focus on sensitivity, it becomes apparent that Lillian is, in the end, just as heartless as her male peers when she tells her employee Stephen (Oliver Burns) that he is not allowed to leave the retreat to check on his injured son unless he wants to suffer serious repercussions. We soon learn the reasons behind the employees’ apparent tensions: Lillian is sleeping with one of her employees who in turn may have also slept with Stephen’s wife. Contributing further to Stephen’s quickly disintegrating well–being is the fact that he apparently stole money from the company and is willing to seduce his coworker Owen if it means avoiding punishment.

When the ruthless higher-up known as Thrasher arrives (the well cast Tullan Holmqvist, whose impressive height has her towering over the men she bosses around), she reminds them that this is their game she’s playing and that they are merely gorillas, telling the men that they are to blame for the heartless corporate jungle that may very well fire them.

Acting wise, the play is well cast and each actor shines in their ability to quickly transition from humor to drama. Oliver Burns in particular shines in his role as he manages to convincingly pull of the many twists and turns of his character as he slowly disintegrates. Gorilla doesn’t feel like a revelatory work, but it held my interest from start to finish in its exploration of the inherent conflicts when vulnerable humans attempt to be inhuman corporate drones.