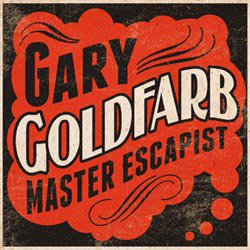 BOTTOM LINE: Jewish clichés abound in this funny, campy, and smartly-written tale about a nerdy would-be magician who hopes to take the world by storm and win the heart of a beautiful maiden.

It’s no secret that 17-year old Gary Abraham Goldfarb (played with pathetic, geeky charm by Jared Loftin) wants to escape from the suburban hell he lives in. His peers call him Gary Goldfat, the school gym teacher (Todd Thurston) berates him for being “a useless slob,” and his mother (Mary Anne Piccolo, in a pitch-perfect, if intentionally shrill, performance that suggests a zaftig Fran Drescher) continually harps on the idiocy of his chosen avocation, performing magic tricks. That Gary spends every waking moment practicing his routine is driving said mama out of her mind, especially since Gary’s now-deceased dad was similarly preoccupied. “Daddy delved in magic/A trick up every sleeve/He slept with his assistant/And left on New Year’s Eve,” she sings.

But Gary is not to be deterred. His goal is to perform in the high school talent show — and take the top prize. What’s more, he’s counting on winning something greater than a metal trophy. Indeed, he hopes to capture the heart of the comely Cheryl Samatasinghar-Stein, (played with ditzy sass and air-headed glamour by Shoba Narayanan) a half-Indian, half-Jewish goddess who has every straight boy in school dreaming and drooling. Gary intends to dazzle Cheryl — to say nothing of impressing the kids who have tormented him since kindergarten — by replicating a trick performed by Harry Houdini, another Jewish trickster. Conjuring the spirit of a wide array of Jewish illusionists and escape artists — among them David Copperfield, David Blaine, and Alexander Herrmann — he plans to perform Houdini’s extremely dangerous Chinese Water Torture trick.

The goal is part revenge fantasy and part self-recreation fantasy, and as these desires unfold several additional issues come to the fore. To wit: As Gary obsesses about the competition and practices his craft, he remains totally oblivious to the flirtatious ministrations of Penelope (played by the immensely talented Krista Buccellato), his only friend. Although Penelope stutters and relies on a wheelchair to get around — making her even more of a harassment target than Gary — it is immediately obvious that she has a huge crush on her oblivious pal. Later, when she ultimately helps Gary win the respect of Tyler (Dimitri Moise) and Kenny (James David Larson), the school bullies, both Gary and mama Gilda Goldfarb are able to kvell and sing their long-overdue praises to this heretofore invisible magical muse.

As you’ve probably noticed by now, each of the play’s characters is a cliché, but Gary Goldfarb: Master Escapist is nonetheless so clever, and the songs are so amusing and well-performed, that the stock roles and predictable plotlines are comforting rather than annoying. In fact, the show is the kind of feel-good musical that will make most audiences, at least in the New York City area, titter and smile. That said, those unfamiliar with Jewish schtick — the neuroses and stereotypes that have come to define the self-proclaimed Chosen People — might find the play confounding since the story presupposes some familiarity with such conventions as the overbearing, but well-meaning, Jewish mother and her intelligent nebbish of a son.

(Gary Goldfarb: Master Escapist plays at the The Alice Griffin Jewel Box Theatre at The Pershing Square Signature Center, 480 West 42nd Street, through July 27, 2013. Remaining performances are July 24th at 1PM and July 27th at 5PM. Tickets are $25 each and can be ordered by visiting nymf.org or calling 212.352.3101.)