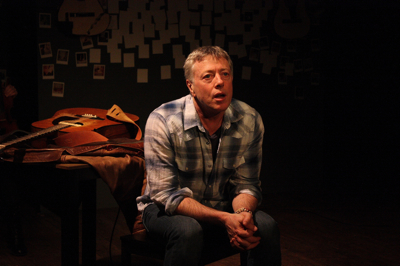 BOTTOM LINE: A new autobiographical musical about a folk/rock musician, bursting with sincerity and filled with many beautiful melodies.

Four Messages is a musical look at singer/songwriter Ned Massey’s life and the series of unfortunate things that he refuses to let keep him down. An abusive childhood, a bipolar music career, and a failed marriage bombard Massey’s life path. But the once “next Bob Dylan” won’t give up.

Performed by Massey and two other actor/singer/musicans, Christopher Sutton and Sarah Hund, Four Messages immediately breaks the fourth wall and invites the audience in, a la a concert in an intimate venue. Massey plays almost every song in the show, at the very least adding accompaniment and usually also singing directly out to the audience (his guitar is always close at hand). His deep, soulful voice accurately supports the struggles he talks of during the narrations in between songs.

The orchestrations also include Sutton on guitar and Hund on violin. The three make an exquisite string section, which is only trumped by the moments they sing together (which there aren’t enough of, in my humble opinion). The final song includes a haunting harmony that was the musical highlight of the night for me.

An earlier version of this show, called Bloodties, played at NYMF in 2010. Though this current version is revised -- and I didn’t see the previous incarnation -- it still doesn’t feel complete, or like the final stop in the show’s journey. Thematic quandaries and structural inconsistencies obstruct Four Messages from exposing the universality at the show’s core, and it doesn’t resonate as deeply as it could. For example, Act I unfolds in the aforementioned concert style, but then at the end of the act Massey passes the proverbial baton to Sutton, and Act II involves a more fully realized musical structure, with Sutton playing Ned and Hund playing Ned’s girlfriend Kate. Though both acts are engaging, the reason for the shift is unclear.

But Four Messages is about a musician, and the music is at the heart of the piece. Massey’s songs evoke Springsteen and Dylan, the musicians he was compared to early in his career, though they uniquely blend a folk component that makes it all a little earthier. The catchy melodies feel comfortable in a theatre setting, though there is never a sense that these songs were theatricalized to meet musical theatre expectations. I sincerely hope Four Messages continues to grow and develop, because Massey’s story of a life of artistic pursuits is completely worth relaying. And if nothing else, his music commands the attention of a larger audience.