Off Off Broadway, New Play
Runs through 3.30.13
Walkerspace, 46 Walker Street 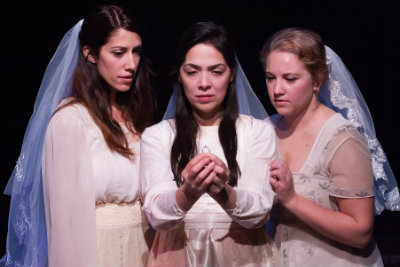 BOTTOM LINE: The ghosts of three murdered women meet in the afterlife to compare notes about the dastardly man who killed each of them in this well-imagined drama.

The women in this true story, all of whom died by drowning between 1911 and 1913, were named Alice (Marissa Porto), Margaret (Nancy Rodriguez) and Bessie (Kate Danson). Their husbands were Henry, George and John. As The Drowning Girls unfolds, the women bare their souls, one after another confessing to having fallen head-over-heels in love thanks to the ministrations of an attentive suitor who literally swept them off their feet. That he was tall and handsome was a plus, they admit, but when he told them that he was man of independent means, they all but swooned. He seemed Heaven-sent, they continue, especially since they were each teetering toward spinsterhood — the derisive term used for women over the age of 25 who had failed to enter into holy matrimony — so were absolutely giddy at the prospect of wedding bells sounding in their immediate future.

That the man turned out to be a serial killer and bigamist — he used three different names to make each of the women his lawfully wedded wife — is, of course, clear in hindsight, but at the time of their initial meeting, the magnetic man they later identified as George Joseph Smith [1872-1915] made them feel like they were the most fascinating creatures on earth. Not surprisingly, they ate it up.

After all, who doesn’t love being showered with romantic attention? Indeed, to finally be able to shrug off the pity and scorn of their families and communities was a dream come true. So what if they’d only known the guy for a week or two? His proposal was heartfelt, he was sweet, and they could not imagine anything going awry. Why would they mind adding their husband’s name to their bank accounts? Why not draw up a will, leaving everything to the man they adored? What was wrong with doing these things within days of tying the knot?

Sheltered damsels such as these lacked the wherewithal to suspect their mate of treachery or deceit. Indeed, he seemed to cater to their every need. For example, when they complained of slight headaches, he convinced them that they needed prompt medical attention and sent them scurrying to doctors, unbeknownst to them establishing a solid medical record. Furthermore, he convinced each woman that she had a seizure disorder and suffered from nocturnal twitches and spasms. That none of the wives had other symptoms of a convulsive condition was bothersome, they agreed, but if they had truly lost consciousness it was also plausible. And why, they asked themselves, would Henry-George-John lie about this? Later, when each woman was found drowned in her bath, one in 1911, another in 1912, and the third in 1913, seizures seemed a likely culprit, especially since there were no signs of struggle on any of the bodies.

This trinity of death would have gone cold had it not been for an eagle-eyed newspaper reader. Noting the similarities in journalistic accounts of the first and second drowning, when a third obituary appeared, the unnamed reader called Scotland Yard and suggested that all three deaths were the handiwork of a mass murderer. Forensics, a new science at the time, was quickly utilized, and Smith was eventually arrested, convicted and sentenced to hang.

It’s a grisly story. While the acting in this production is uneven — Porto as Alice is the strongest of the three performers — a tight script and excellent staging and set design offer an intriguing glimpse into early 20th century gender relations and the pervasive sexism that made women easy prey for scoundrels. In the guise of protecting “the fairer sex,” middle and upper class females became naïve dependents and passive victims, racing to marry any Henry, George or John who asked for their hand. The play flows smoothly, and the three claw-footed bathtubs that provide the setting for most of the drama, are simple and elegant (set design by Daryl Embry). Combined with the sound of running water, the eerie overlay of ghostly collaboration offers a creepy mediation on seduction and lust.

A powerful tale, The Drowning Girls is a loving memorial to three long-forgotten women who died because they trusted a charismatic man who seemed to be too good to be true. In the end, we’re left to ask ourselves whether the truism is true: Is it really better to have loved and lost than never to have loved at all? Or, should prudence trump passion and caution triumph over spontaneity?

(The Drowning Girls plays at Walkerspace, 46 Walker Street through March 30, 2013. Tickets are $18 and can be ordered by visiting strangesuntheater.com/tickets. Performances are Tuesdays through Sundays at 7:30PM with added 3PM matinees on March 23rd and March 30th. For more show info visit strangesuntheater.com.]