Off Off Broadway, Dance
Ran through 9.21.13
Center for Performance Research, 361 Manhattan Avenue, Brooklyn 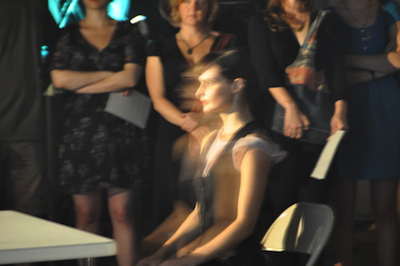 BOTTOM LINE: Four dancers and three musicians introduce the oft over-looked mechanical repartee of the military through dance and media.

Motley Dance’s engaging production of Drill Piece greatly benefits from a few things: an educated and thoughtful director in Elisabeth Motley, a lengthy incubatory timeline, and a really beautiful cast. From the start when dancer Sharon Milanese begins the piece with the distorted phrase “…I put my boots on,” we are at attention. The choreography is a pleasurable blend of staccato repetition and fluid chaos, which swirls in the stark white space at the Center for Performance Research. The company uses the whole space on different occasions to emphasize its subject, whether in the lobby where a number of chalkboards request fill-in answers, or on the actual stage where black and white animation regales the dutiful moments of war.

The absence of wings doesn’t jar the piece, and the company embraces this reality by creating soundscapes from ordinary objects. In Drill Piece “ordinary” abounds, using familiar tropes: music as atmosphere, costumes as uniforms, and choreography as mandate. There is a certain pass with Jane Sato, Lea Fulton, and Meredith Fages which underscores this a bit. While moving upstage, Fages and Fulton, led by Sato, rigidly repeat an angular phrase—heads strike upward, hands perpendicular—and just before we predict their pattern Fages and Fulton burst free from the track in new choreography, only to return to the previous. This kind of recoiling/restarting utterly engaged and surprised me.

I began to think whether repetition is harmful; whether the seemingly mindless aspects of marching remark on intelligence, but then I felt comforted that I could possibly predict the dance’s landscape. The piece ultimately abandons predictability, however, in two keen moments. Fages’ solo on a diagonal path is a considerably bright event. With searing power, accentuated by a blip of mauve in her coif, Fages strikes the stage with the semblance of a warrior warring with PTSD. Her electric leaps send her slamming into the same walls which illuminate paratroopers jumping from planes. The piece’s fusion of many art forms, here, seems authentic and assistive rather than distracting.

The second point of abandon occurs when the four women take the musicians from their posts, whispering inaudibly, to the upstage wall. There, all seven lean and support the others’ weight in a quizzical manner. I loved the piece’s moments at the upstage wall, actually, because they often exemplified that elusive weightiness within the body where we could see a struggle. There’s a moment all four women count and repeat the same phrase in cannon, eventually giving way to those same fleeting bursts of random weight. With musical, visual, and textual reconstruction happening simultaneously the piece’s reimagined army uniforms of feminized fatigues with flowing green button-ups or camisoles was also intriguing if not necessary.

The lasting element in the dutifully researched Drill Piece is its quite incongruous end, however. After being “ignored” all night, the four women engage us with signs like “stand,” “applause,” and “scream.” Quite possibly the ending is a hazing; folding us into the cadre, perhaps, but as many critics say it is also just maybe Motley’s calling card of humor and lightness in a probing piece such as this. Either way I felt challenged, and dare I, drilled.

(Drill Piece played at the Center for Performance Research, 361 Manhattan Avenue in Brooklyn, on September 20 and 21, 2013. Tickets were $15-$18, and were available at brownpapertickets.com. For more information, visit www.motleydance.net.)