A Dish For the Gods 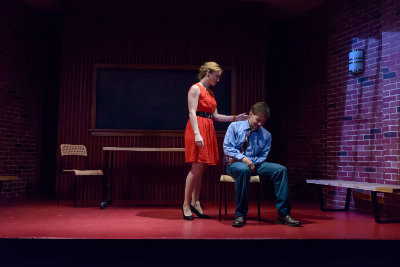 Margot White and Kevin Cristaldi in A DISH FOR THE GODS. Photo by John Kandel.

BOTTOM LINE: A strong performance from Margot White helps make this play about a romantic relationship soured by ambition an engaging one.

Academia serves as the setting for a turbulent romance ruined by ambition in the new play Dish For the Gods by Victor L. Cahn (who also penned 2012's Getting the Business). The play is staged, initially, as a lecture on women in literature. The lecturer, Julia (Margot White), arrives late and frazzled. Unable to focus, she instead decides to segue way into the story of her own personal drama by which she is preoccupied. She then launches into the story of her ill-fated mentorship and later romance with Chris (Kevin Cristaldi). We then flashback to Julia as a young, directionless college dropout, who is inspired to return to school through her exposure to Chris, a passionate professor whose off-the-wall lectures on literature keep his students riveted. (There are some insightful observations on what it takes to give an engaging class lecture, surely inspired by Cahn’s own profession as an English professor.) Julia audits Chris's class and then eventually becomes his student, going on to major in English and garner an MA in the same subject. At some point Chris acts on his obvious attraction to Julia, seducing her by quoting Shakespeare's Antony and Cleopatra and referring to her as a “dish fit for the gods.” Julia follows Chris’s path to a T, going on to teach herself. When Chris allows Julia to guest host his literature themed radio show she garners a publishing career and also takes the hosting gig away by showing more enthusiasm than sometimes lackluster Chris can muster. A trace of frustration crosses Chris’s face when he hears the news, but he quickly masks it, pretending to be pleased by Julia’s sudden success. When Julia decides to move to New York City to follow her professional ambitions, Chris asks Julia to stay, telling her he envisioned marrying her and having children with her. Julia tells Chris that if he wants to be with her he can follow her to New York. Chris refuses and the two part ways.

Julia’s ambition grows larger whereas Chris’s life slows down and the few times she visits him she is upset by what she sees.  The first time they reunite Chris is a despondent mess, sitting depressed amongst a mess of student papers. The second time Julia finds him married with a child, and finds that they have so little in common that she can’t bear to speak to him for long. Julia tries dating other men but finds herself unhappy and unwilling to get attached, as though her great ambition prevents her from being tied down.

Julia’s big question is whether or not leaving Chris was the right thing. Cahn never gives us a clear answer, but he seems to allude to the fact that Julia’s hyper ambition kept her from having a simpler, more love-filled life with Chris. The play makes frequent mention to The Taming of the Shrew and Chris talks about what he perceives as being the message at the heart of it: that a woman needs to give herself over to the man that she loves. Cahn seems to be criticizing a woman letting ambition get the best of her. Depiciting ambitious women critically is familiar subject matter for Cahn: In Getting the Business he depicted a woman who heartlessly uses and betrays men as she becomes more and more ambitious and makes her way up the company ladder. Perhaps as an English professor Cahn offered a deeper meaning beneath his title. The complete lines from the play read as follows: “I know that a woman is a dish fit only for the gods, as long as the devil hasn’t prepared the meal...But devils cause a lot of trouble for the gods regarding their women. For every ten women the gods make, the devils ruin five.” Perhaps Cahn means to imply that Julia has been ruined by the devil, which in this case would be professional ambition. However, despite Julia’s confusion, I would contend that she made the right choice, be she single forever or not.

A Dish for the Gods is a strong, engaging work that is staged around a unique premise, even with its mixed message. The character and relationship developments could have been stronger, but the powerful performances from the two actors more than make up for any gaps in the writing. Margot White gives an impressive, emotionally charged performance. The fact that she remains engaging, even when she is alone on stage for much of the play, shows her talent as a performer. Her gift for displaying nuanced emotion, along with the guidance of director Adam Fitzgerald, makes Julia’s struggle a compelling one.