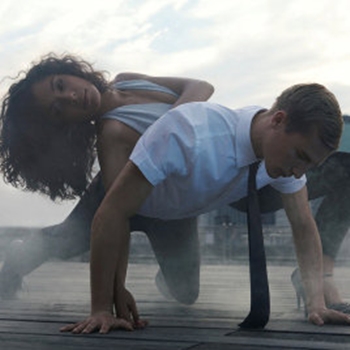 The evening at Symphony Space began with a long, poetic procession. The Kronos Quartet music was layered over with bells and birds in the distance. As "Dark Mourning," Take Ueyama's new creation, began, one by one the dancers carved interaction and meaning into the grieving process through their unpredictable sharp turns and rocking hand gestures. Kile Hotchkiss created a tormented figure not unlike the pieta with his movement. (Michelangelo did not want his version of The Pietà to represent death, but rather to show the "religious vision of abandonment and a serene face.") Another solo by Kristen Arnold beautifully represented for me the controlling of grief and the loaded nature of the body in that state. The gentle delicate movements of her hands created comfort in the rigidity of her body. The duet between Brynt Beitman and Elise Drew had a feeling of a reliable, nurturing love without lusting. John Eirich had an explosive acrobatic solo that addressed feelings of wild anger and acceptance. Gina Ianni contorted her body into impossible shapes and created a quiet, graceful yearning. "Dark Mourning" was an interesting exploration of grief--raw but not overly dramatic.

The second piece was a duet for Ueyama and assistant director Jill Echo choreographed by Ueyama's mentor and esteemed Graham dancer, Kazuko Hirabayashi. It was based on the Japanese ghost story "Tales of Moonlight and Rain" and set to the sound of an eerie flute. I was not entirely sure of the story, but the chemistry in the dancing made their intentions clear. Echo taunted Ueyama with her parasol, and Ueyama chased her only to find she has a snake. Ueyama's athletic solo showed that he's still got the moves. It was a pleasure to see him glide across the floor with his unique silky, carefree, and commanding qualities.

The final piece, "Flight," had music and sound by Ana Milosavljevic, Damian Eckstein, Aleksandra Vrebalov, and Phillip Glass. The projections across the back were striking and not unlike cloud formations of crows reminiscent of the Hitchcock film The Birds. I liked Ueyama's quote in the program: "Looking up, I saw a flock of starlings playing in the sky. Their movements far surpassed any dance I have ever witnessed, with their breathtaking unison flights and banking turns, sculpting the air in patterns so seamlessy elegant." It was incredible to see the dancers take flight. As they lifted one foot off the ground, it seemed as if they were floating. The quartet was airy but with interesting complexities that grounded their movements. Solo dancer Barry began as a man jumping flat off the ground as if falling through mid air. The dancers grazed across the floor at rapid paces making it feel as if we were watching a slice of the sky condensed onto the stage. The group sections churned from slow pivoting movement to the aggressive. Lynda Sensisi shot out of the group as a lone renegade bird and then was swallowed back into the machine-like phrases.

It was an almost full house and people leapt to their feet at the end. It was unfortunately a short run, but it was wonderful to see that Ueyama will also be creating works for Adelphi, ArcDanz in Mexico, the Hartt School, and Juilliard this year.