By William Shakespeare; Adapted and Directed by Paul Bedard
Produced by Theater In Asylum

Off Off Broadway, Play Adaptation
Runs through 7.20.13
UNDER St. Marks, 94 St. Marks Place 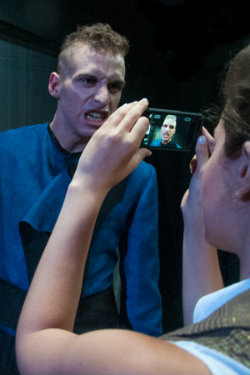 BOTTOM LINE: Theater In Asylum attempts to bring Shakespeare into the Twitterverse with mixed success.

Coriolanus is one of Shakespeare’s lesser-known works but interestingly enough is also one of his more relevant pieces to the current socio-political climate in America. Theater In Asylum’s production, appropriately titled #Coriolanus, attempts to capitalize on that relevance, occasionally hitting their mark but just as often falling short of it as well. The idea to have the performers live tweet the show is an undeniably bold choice. Unfortunately it never really pays off the way it seems to have been intended. In the few scenes of the 90-minute production when performers tweet it ultimately plays out like stage business, given to pass the time while the actors deliver text they aren’t really paying attention to -- because they are busy taking pictures and tweeting them. It reminded me of the James Franco “live tweet the Oscars” debacle that ended up with an unfocused Franco looking down at his phone while Anne Hathaway desperately tried to salvage the wreckage. It’s really unfortunate that the tweeting wasn’t placed in the show more strategically. An example would be at one point during the performance when two characters are tweeting while Coriolanus (Russell Peck) speaks to them. The audience’s focus is torn between listening to Coriolanus speak, watching the tribunes tweet, wondering what they are tweeting, and feeling the desire to check out of the performance to follow their tweets. It takes away from the passion of the moment and the story being told directly in front of us to have the actors taking themselves out of the story to tweet. (Also, an unfortunate side note: because UNDER St. Marks is a basement theater there is little to no cell phone reception. Personally, I couldn’t even sign on to Twitter to follow the tweets during the show.)

The cast for #Coriolanus is small, and because of this many roles are combined. The play opens with Madeline Reed, who plays Coriolanus’ mother Volumnia, giving a speech to the populace of Rome, depicted by various amalgamations of twitter feed hashtags projected on three screens around the stage. The citizens exist in a sort of digital realm that works well with the Twitterverse concept. The metaphor connecting the uneasy time in Roman history to today’s society, and our ability to control and personalize information like we never have been able to do before, is strong and poignant. And in that way the concept works well.

After Volumnia’s speech we are introduced to Caius Martius. The story follows Caius Martius as he wins a victory for Rome, earning the name Coriolanus for the city that he sacked, Corioles. His mother, the epitome of a pushy mom, convinces him to run for consul, despite his hatred for the Roman citizens. Two tribunes, Brutus (Julie Robles) and Sicinius (Julia Giolzetti), key in on this hatred and use it against him, eventually convincing the Roman people to his banish him. Without Rome’s support, Coriolanus wanders into the camp of his sworn enemy, Aufidius (Martin Boersma.) He lays his life before Aufidius, but Aufidius takes pity on him and invites him to fight by his side, against Rome. The play’s climax occurs as Coriolanus and Aufidius prepare to invade Rome, and Volumnia arrives to plead with Coriolanus to spare the city for which he formerly fought.

The setting for this adaptation of Coriolanus is uncertain. The verse from the original play is primarily in tact, including all the references to Rome, however they use cell phones and twitter, and the costuming suggests a sort of Hunger Games-esque futuristic style. Still, the moments of the play when references are made to our current political climate are strong. For instance, when Sicinius and Brutus imitate the speech patterns of contemporary politicians the metaphor hits home. The first half of the piece lacks energy and passion but as the plot progresses the pace increases and the entire piece is better served for this injection of energy. Composer Randall Benichak provides a solid, tribally rhythmic score that accompanies the decently choreographed fight scenes. Overall though, despite the piece’s clear intentions the delivery of said intentions isn’t fully realized.