By Jonathan Marc Sherman; Directed by Ethan Hawke
Inspired by Baal, by Bertolt Brecht
Produced by The New Group 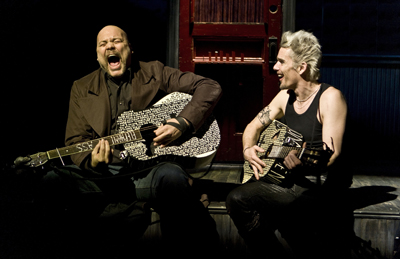 While watching Clive, I experienced an internal conflict: here was a play that felt experimental, atmospheric, and interestingly unorthodox, yet here was a production that felt commercial and sterile. Dark and dirty can only be communicated as the idea of dark and dirty when presented in one of Theatre Row's traditional stages on 42nd Street. And I have a feeling that Clive could have benefitted from actual dirt.

A reimagining of Bertolt Brecht's first play Baal, Clive follows its title character on a downward spiral of bad behavior. Clive (Ethan Hawke) is a rock star (ex-rock star? wannabe rock star?) who is deeply entrenched in the bad boy lifestyle (think snorting coke off of breasts and a revolving door of sexual partners). Some of the people in his life enable these choices, and some offer voices of reason inevitably lost in a life of indulgence. Clive makes a series of irresponsible decisions that result in depression or pregnancy or death. As far as plot development goes, this is pretty much what you've got -- the anti-hero loses control.

Ethan Hawke also directs Clive, and to his credit he very successfully uses his ensemble. Hawke as Clive and Vincent D'Onofrio as Clive's friend Doc are the only actors who play just one character. The remaining seven cast members deftly bounce from bartender to record producer to groupie to mental patient, etc. as the play goes on. At times they also add to the production's soundscape, either playing conventional instruments (piano and guitars), singing, or utilizing the cleverly implemented set pieces with various instruments built right in. Brooks Ashmanskas, Stephanie Janssen, Mahira Kakkar, Zoe Kazan, Aaron Krohn, Dana Lyn, and Jonathan Marc Sherman (also the playwright) are a nimble chorus.

Also worth mentioning is Clive's design, which is completely beautiful by itself. The sets (Derek McLane) consist of doors oriented in different directions, which are used as entrances/exits as well as boundaries between playing spaces. As previously mentioned they come with instruments embedded, and provide their own ingenious use. Jeff Croiter's lighting design and Shane Rettig's sound design deserve accolades of their own -- the world created on stage is ethereal and dismal all at the same time. Music and sound sculpture is by Gaines -- the constant use of music and sound adds much to the atmosphere.

For what it's worth, Clive's playfulness and innovation are fun to experience. The thin plot and indulgent nature of the performances and presentation style can be distracting, but Clive is clearly going for uniqueness. It's a riff on Brecht, utilizing verfremdungseffekt, the "alientation" style of presentation that keeps the audience aware that they're watching a piece of theatre. There are other Brechtian Easter eggs throughout -- the use of signage on Doc's wings, for example, and the inclusion of Brecht's "Alabama Song" in the set list. Like any experiment, you can't be certain of the outcome ahead of time -- Clive might yield a more successful outcome at a scrappier venue and for a more proletariat-friendly ticket price.