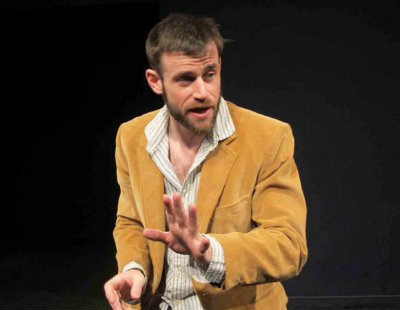 This final installment of Jack Finnegan's international storytelling project marks the end of a three year endeavor that had him exploring humanity's cultural differences both on an international and national level. Finnegan traveled across the U.S. exploring what constitutes our daily lives in differing cities and then expanded his project internationally, sharing stories about America with those abroad. In this installment, Finnegan shares his experience of talking to global audiences about American life, and trying to adapt suddenly to countries where he often lacked language skills and cultural insight.

As the work is for the most part unscripted, each performance of City Love Song varies. On the particular night I attended, Finnegan shared his experiences while visiting Guatemala City, Rio de Janeiro, Berlin, Casablanca, Marrakech, and New Delhi. However, the included press materials denote that he has other tales from other cities to include. As Finnegan lacks fluency in any language outside of English, his ability to connect with the foreigners he encounters is often small, although a native friend of his in Rio de Janeiro allows him to encounter the people on a more complex level than other cities. Among his strongest stories was a visit to Berlin (Finnegan has an understanding of basic German which allowed him to better understand the events unfolding around him) in which he humorously depicted the German people's natural inclination towards conformity and stoicism in their behaviors. In Casablanca he encountered a people and a culture with whom he can find no conduit for easy connection. For New Delhi he gave a moving portrait of a city in the middle of political upheaval and of the kindness strangers showed him. Finnegan attempts at each stop on his agenda to share his stories of America in spontaneous performances in the cities' public spaces, as his performances are always in English they are often met with humorous indifference and confusion.

Finnegan has great skill as a storyteller and his delivery enables him to make the mundane seem compelling. Although his attempts at connection do not always succeed, his stories are both touching and hilarious when he is able to connect to others despite the large barriers of language and culture. Sitting through a series of his tales gives one a sense that we as a species are perhaps at times more similar than we might think.