Conceived, Choreographed, and Directed by Martha Clarke; Text by Tina Howe
Based on the novel by Collette 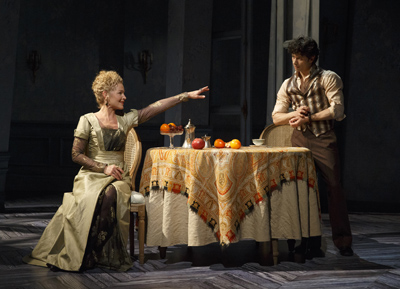 BOTTOM LINE: Exquisite dance, beautifully performed, is not enough to make this an engaging dramatic production.

According to program notes for the play Cheri the novelist Collette advised writers to dispense with plot: “No narration, for heaven’s sake! Just brush strokes and splashes of color, and there is no need for a conclusion...Liberate yourself!”

Lord knows, I’m all for liberation — but the literal interpretation of Collette’s words by director Martha Clarke make this production of Cheri less successful than it might have been. The three-character drama includes Charlotte (played with imperious zest by Amy Irving) as the mother of Cheri (the American Ballet Theatre’s principal dancer, Herman Cornejo). Irving has the only speaking part in the play and it is her narration that gives us the bare bones of the plot: Cheri, her vain 24-year-old son, has been having an affair with her best friend Lea (Allessandra Ferri, formerly a principal dancer with the American Ballet Theatre), a beautiful, independent, and sexually voracious ballerina who is nearly twice his age. Mama is predictably perplexed by this liaison and pushes Cheri to marry a woman who is more age appropriate. He complies. But when World War I demands Cheri’s service, he leaves hearth and home and heads to the front. When he returns, he is a shell-shocked mess, wandering aimlessly in a daze of depression and angst. Cheri then chronicles the resumption of his extra-marital affair with Lea as well as his continued psychological unravelling.

The dancing — Lea and Cheri never say a word but attempt to convey their emotions through movement — is lovely. But it gets monotonous, especially since Irving’s narration is sparse and does not go far enough in conveying the intense emotional upheaval that we are supposed to be witnessing. What’s more, Cornejo does not look 24 — he is actually 32 — so the vast age difference between him and Lea is less startling than Collette intended. It’s also unclear what their living arrangements are; since the set never changes it seems as though Lea, Charlotte, Cheri and Cheri’s unseen wife all share one dwelling, which, if true, would have added an element of intrigue that is never addressed.

Ballet aficionados will thoroughly enjoy Cornejo and Ferri’s performances. Unfortunately, those looking for a dramatic rendering of Colette’s risqué 1920 novel, will likely be less jazzed by Clarke’s innovative, but flat, composition.