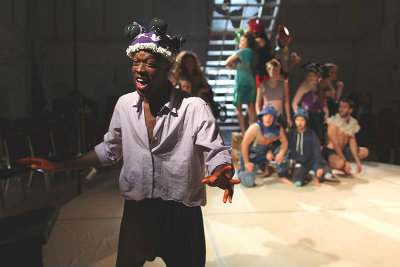 Kip (Ronald Peet) and the Pack in BYUIOO.

BYUIOO is an innovative, ambitious musical by Nate Weida. He proves the point that a musical does not need wordy lyrics to communicate a plot. The power of music and actions on stage are enough to engage and to transport us. Halfway through the show I seemed to completely understand the language, part Latin/Romance language, part childlike English gibberish.

The show begins with a rumbling of rhythmic pulsations by a cast of 16 actors, directed by Andrew Neisler and choreographed by Ben Hobbs. You will be woken up by the percussive dance of the cast. The musical direction is by Nate Weida, with Weida himself playing the piano in a captivating band including guitar (Wesley Zurick), drums (Christopher Kinlow), and bass (Peter Longofono). The music is a joyous and uplifting gospel score infused with dance rhythms. I'm classically trained and usually not a great fan of gospel music, but I enjoyed Weida’s melodic score and the expressive but not overdone voices of the solo singers, for example, the warm voice of Carla Menkin (as Akela, a suiting pack leader), or the occasional clear, high voice leaps of Arielle Siegel (as Matkah, a memorable white-bearded pregnant tribe member), or the liveliness of Ronald Peet (as Kip, a friendly character and protector of a newborn member of the tribe). Many singers have an opportunity for a solo piece in the show.

The plot, without knowing much about the background and the language that they speak, is clear to us: it is set in the future after civilization has been destroyed, and the remaining humans band together to survive. The audience surrounds the circular stage, frequently being drawn in to be involved with their community. The tribe starts out as a happy family, sharing food sources and whatever they can scavenge in their habitat. Over time, the group splits up and some individuals bully other groups. Greed and selfishness dominate certain members of the community. However, Mogo (performed by Molly McAdoo), the newborn of Matkah, is a prized new member of the community — a symbol of purity. This young person grows up beautiful, loved by everyone. But in one scene, purity is lost; more violence and greed in the community surfaces. The ending seems to suggest a grander message, but the message isn’t presented as clearly as it could be. If the feelings of loss and the moving moments of youthful, innocent beauty are to be juxtaposed and felt deeply, they are not present. I was confused by the character of Mogo, but I do think the character has potential to bloom and pull our heartstrings in wonderful ways.

The performance I saw was a fabulous cast of jumpy, energetic actors all with attractive voices. The costumes, designed by Meghan Gaber, are corky and colorful, fitting to the idea of a future wasteland.  The lighting, by Joe Cantalupo, is practical and creative with actors on stage spotlighting the actions. I recommend this show for an easy-going, fun-filled evening of good songs and dances.

(BYUIOO plays at The Gym at Judson, 243 Thompson Street, corner of Thompson and Washington Square South, through November 16, 2013. Performances are Wednesdays at 8PM; Thursdays at 8PM; Fridays at 8PM; Saturdays at 8PM and 11PM. Tickets are $18 and are available at judson.org/The-Gym or brownpapertickets.com.)