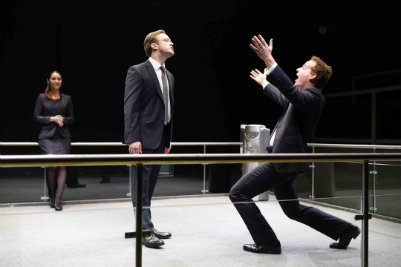 BOTTOM LINE: A smartly written, expertly acted and directed workplace tragicomedy that should not be missed.

Kudos to 59E59 Theatres' Artistic Director Elysabeth Kleinhans and Executive Producer Peter Tear for bringing The Sheffield Theatre's recent production of Mike Bartlett's Bull across the pond to fight it out here as a part of the Brits Off Broadway Series. Bull is a well-crafted workplace drama with biting comedic undertones staged in an inventive way and sure to interest New York audiences looking for a for an exciting evening of thought-provoking theatre. The premise is simple: three employees, two jobs, a no nonsense boss, and it's time for someone to get the boot.

Inter-office politics mirror schoolyard bullying in this simply staged production brilliantly helmed by Clare Lizzimore. The action of the play takes place in an actual fighting ring with the audience standing on all sides as if they are watching an illegal cock fight in the basement of a seedy bodega's back room. Written as a companion piece to last season's off Broadway hit Cock, at times Bartlett's prose is as hard to watch as a vicious cock or bull fight. The icy Isobel (Eleanor Matsuura) and self-assured Tony (Adam James) pick away at the helpless but lovable Thomas (Sam Troughton) in a merciless yet somehow elegantly conniving manner; you want to look away or help the injured Thomas, but of course, you can do nothing. From the moment you walk into the theatre, you feel like you are about to witness a major prize fight from two world heavyweight champions. The '80s music blaring through the sound system gets you revved up to enjoy a knock out, drag out, all out brawl, and Bull does not disappoint.

It's hard to say more about the play itself without giving away too much. Just know that you will see three powerhouse performances that rival anything that you will see on Broadway this season for a fraction of the cost. The script is great, the acting first-rate. Be warned: It is by no means the feel good comedy of the year. Bull manages to capture the ruthless aspects of the corporate business world that so much resembles the playground bullying tactics of primary school-aged children. People often say that things get better as we get older, that you can simply talk out your disagreements, and that hard work and doing the right thing will be rewarded. Bull debunks all of those notions and forces us to face the realization that sometimes life can just be a huge steamy pile of Bullshit.

Go see Bull. While they sell regular seats, I highly recommend standing ringside. With a relatively short running time of just under an hour, the time will fly by. You want to be as close as you can to witness every tortured quiver in Sam Troughton's face, the unwavering stare of contempt from Adam James, and the remarkable sadistic final monologue from the incredible Eleanor Matsuura. It's damn good theatre that should not be missed -- first rate acting, writing, and directing that come together to tell a simple story with unabashed gusto in a manner that could have easily turned into a bad cliché, but is instead a knockout punch of theatrical awesomeness.