$12 for students and seniors

To purchase tickets and for more information visit apacny.org 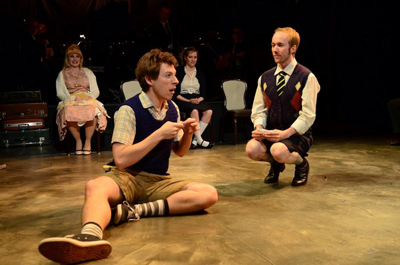 BOTTOM LINE: A wonderful reimagining of a musical that never quite hit its stride in the states.

Blood Brothers played in London's West End for a whopping 24 years, closing just this past November. However, its Broadway run lasted only a couple of years in the mid-1990s. For musical theatre aficionados, its legacy is known and the show maintains a bit of a cult following even today. For that reason alone, it is highly recommended that you see APAC's ambitious revival. And for those who don't much care for musical theatre history, you will also find much to enjoy from this production.

Director Tom Wojtunik astutely considers in his program note the reason for the disparity in the show's success across the pond: the story revolves around two economically diverse families and what it's like to grow up in affluence vs. near poverty. Perhaps Americans in the 1990s just weren't interested in a story that so neatly defines socio-economic stigma. But now after the recent financial meltdown, we might be in a much better suited situation to appreciate a story like this. It certainly feels like an opportune time to me.

Blood Brothers is a classic nature vs. nurture story. Twin boys are born to a mother who can barely afford to feed her other children. In an act of desperation, she gives one of the boys to the wealthy woman she works for who can't have children of her own. The boys grow up as friends but never know the truth about their relationship until it is much too late. Based on a 19th century novella, the story feels like a legend, or a ghost story passed down through the generations. The tale of the twins precedes the story itself; in the musical, a narrator tells us outright about the legacy.

APAC has cleverly staged the show with the cast on stage nearly all the time. The action occurs in the middle of the playing space, with the audience on three sides and the band on the other. The actors take turns placing the sparse set pieces and making the sound effects that occur throughout the show. The audience is always aware of the seams; since we enter the world of the play already knowing what fate holds for the twins, we are able to engage in a unique way with the storytelling itself. And that's really clever.

I've seen several productions at APAC and I am always amazed by the quality of the work that is presented. It's not that my expectations are low, it's just that they're always exceeded. The professionalism and ingenuity -- not to mention the general attention to creativity and playfulness -- is always enthralling and refreshing. If more theatres took the risks that APAC does, audiences and artists would all be better off.

The cast of Blood Brothers is highly capable and exceedingly energetic as they work together to tell the story, contributing even from the sidelines. Standout performances include the brothers, Rowan Michael Meyer as the poor twin Mickey, and Simon Pearl as Eddie, the affluent one. Pearl’s love song serenade is particularly charming. And Colleen Hawks, as the boys' biological mother, imbues Mrs. Johnstone with a sad remorse below an otherwise sunny exterior. But this production isn't so much about the acting as it is about the transparent portrayal of fictional characters contributing to a larger real-life conversation. Wojtunik's Blood Brothers is more about revealing than transforming.

If you can make it to Astoria to catch the last weekend of Blood Brothers, I doubt you'll be disappointed. The show is a treat for both musical theatre geeks and everyone else. And though there are enough holes in the plot to drive a dramaturg crazy, the overall intention and much of the music succeeds far beyond the details. This is a show to experience.

(Blood Brothers plays at Astoria Performing Arts Center, Good Shepherd United Methodist Church, 30-44 Crescent Street, Astoria, through May 25, 2013. Performances are Thursdays and Fridays at 8PM; Saturdays at 2PM and 8PM. Tickets are $18, or $12 for students and seniors. To purchase tickets and for more information visit apacny.org.)