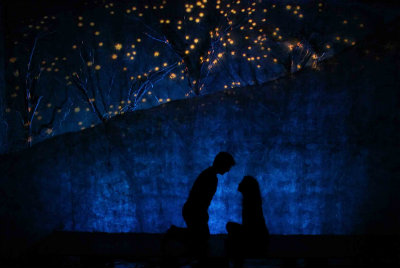 BOTTOM LINE: Three grizzly bears struggle to find their place as their very existence changes around them in this charming new world allegory.

For many, the comforts and familiarity of home, including even the most rudimentary of luxuries (like the smell of a familiar hand soap, say), trumps any longing for the unknown outside, the dangerous wilds of the unfamiliar, or possible pathways towards alternative development. But when stagnancy is overturned by necessity, both wonder and adaptation become key characteristics in order to move forward, lest the unsustainable ghost of home return to squelch any possibility of forward movement. Set to an allegorical tune, Mark Rigney’s Bears examines the nuances of what it means to grow and evolve in a contemporary setting through the upended lives of three grizzly bears.

All is not well when two begging bears, simultaneously “menacing and adorable,” cannot yield a single treat thrown from a pleased patron or zookeeper, as is the case at the opening of Rigney’s new play. Wise old Growl Bear encourages restless and hungry Timmy Bear to keep his composure and quit worrying about what foolishness zookeeper Annie might have said about a tanking economy. Things are as they have been and will be, Growl Bear insists, despite clear red flags that things most certainly are not -- first and foremost the sudden lack of food, not to mention the utter lack of patronage. Unbeknownst to the bears, some unspecified apocalyptic occurrence has put humans on code red lockdown, leaving streets, and zoos, deserted for the imminent future. What’s more, in anticipation of the shutdown, various animals from neighboring zoos have been trucked in, including once-wild Susie Bear, who quickly finds Growl Bear and Timmy, and just as quickly becomes disgusted by their overtly domesticated ways. She eventually convinces them to head for the hills with her, thrusting them into sudden confrontation with the life they’ve never experienced.

Faithfully a gentleman and a scholar -- though in bear form -- Growl Bear does not take lightly to wilds, rejecting raw fish and bark grubs, instead choosing to scavenge for only the most civilized of human trash. Consoled daily by the world’s only remaining radio hostess, teaching spelling and reading Tolstoy into the void, Growl Bear tries as best he can to prevent his domesticated upbringing from being sublimated by forest barbarism, instead opting for a total rejection of natural processes. Timmy Bear, on the other hand, quickly eschews his crowd-pleasing traits for sneakier footfalls, fiercer hunting skills, and unavoidable natural urges directed at Susie Bear. The two become each other’s foil: snobbish intellectualism versus appropriate adaptation, pinioned at two ends of an increasingly widening spectrum, never again to find truly common ground.

Without too much undue underscoring, Bears cleverly opens up a discussion about our contemporary state of being and operating in an ever-changing world -- one in which, to most New Yorkers' disgruntled terror, the natural world is beginning to ferociously assert itself in ways not seen for lifetimes. The absurdity of three humans acting like bears for the course of a two hour performance ultimately smites far less than the fundamental absurdity of a big brown bear so removed from his own world that he’d rather learn to type than fish, which, by the end, is the nearly too-didactic representation of this silly-sad Western world. Thankfully, and smartly, Rigney’s play closes in a shroud of ambiguity, leaving the conversation on the shoulders of the upright hominids exiting the theatre.

All told, Bears is a conversation well worth starting, especially as nature continues to assert its might over all of us as these raggedy-coated and frozen-nosed late-March days drag on.