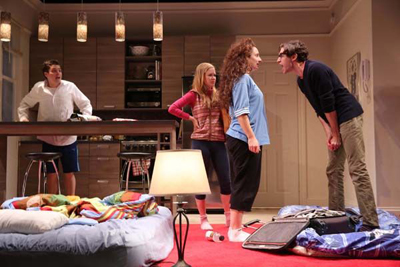 BOTTOM LINE: A very funny new play about religion and cultural ties in the 21st century.

Self-identity is often tied to one's cultural background, as we see in Joshua Harmon's new comedy Bad Jews. Daphna Feygenbaum (Tracee Chimo) was born Diana Feygenbaum, but after a recent trip to Israel she recommitted to her roots. She is appalled when her cousin Liam (Michael Zegen) brings home his shiksa girlfriend Melody (Molly Ranson). When pressed by Daphna about her family's lineage, Melody can only go back a few hundred years...to Delaware.

Bad Jews is a hilarious strung-out argument between cousins who are in town to attend their grandfather's funeral. Liam shows up late because he was vacationing in Aspen with Melody and lost his phone, receiving the news about Poppy's death too late. When he arrives, Dapha's ready to attack. And when Liam tells her that he is in possession of Poppy's cherished Chai necklace -- the one that Daphna wants so badly -- insults are thrown at high speed between the perpetually warring cousins. Liam's younger brother Jonah (Philip Ettinger) tries to stay out of it, while Melody tries to reconcile the hideous behavior of her beau and his extended family.

Bad Jews premiered last season at Roundabout's tiny black box theatre in the Harold and Miriam Steinberg Center for Theatre, as part of the Roundabout Underground series. After a tremendous response from critics and audiences it now plays at Roundabout's off Broadway space, the much larger (by several hundred seats) Laura Pels Theatre. Though the humor certainly lands in the Pels, the cast's nuanced scowls, awkward movements, and generally hyper-real behavior would have been hilarious even closer (I sadly missed it last season). But regardless of the theatre's size, the able cast easily charms the audience, reveling in the heightened emotion of the evening.

Chimo, in particular, is physically captivating as the overbearing young woman who doesn't know when to back off. And oh god, that hair. That hair deserves its own paycheck because it is a character in its own right. Anyone blessed with a traditionally Jewish mane will commiserate (everyone else will remain appropriately appalled).

Director Daniel Aukin successfully lets the cast play into the humor, while maintaining the sincere considerations at the heart of the play. Harmon's study of how 20-something Jews perceive their cultural background is an interesting one, certainly worth the conversation as more and more young people turn away from organized religion. And Harmon's highly entertaining script is the perfect package for such a dialogue. Bad Jews is a great treat.