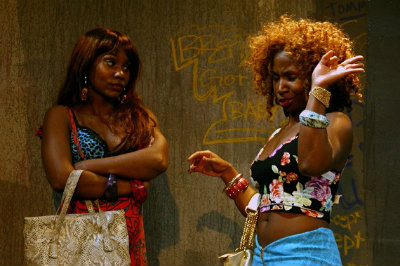 BOTTOM LINE: Despite a thin storyline, this play shows strength in the cast's performance and in its unusual staging.

The unusual play Alondra Was Here takes place in an unnamed society where people mysteriously disappear with increasing frequency and whose dictatorial mayor is shown to be a rule-loving psychopath who may be responsible for the disappearance of several young prostitutes. The play opens with sisters Anise (Joniece Abbott-Pratt) and Alondra (Lolita Foster) dressed in ostentatious and revealing outfits as they pose as prostitutes, set to take out the mayor. Alondra scrawls her name across a wall in lipstick, trying to leave a trace of herself in a world where each day is uncertain.

Suddenly, in a flash of light, Alondra vanishes. It is not until the end of the play that we learn exactly what happened to the sisters, but it is terrible enough to leave Anise sitting against the wall in a catatonic state for days, not even blinking when neighbors loudly fornicate next to her. Friendly neighbor Dusty (Rey Lucas) helps her snap back into reality by offering her soap and water to clean herself up. The two try to piece together some semblance of a normal life, finding solace through each other. However, when the ghost of Alondra appears, Anise realizes that she still wants revenge.

The ultimate strengths of the piece lie not in the script or storyline, but rather in its evocative lineless scenes that are interspersed throughout the larger storyline. A trio of suited men (Brian McManamon, Mike Rosete, and Christopher Myers) play members of the mysterious government responsible for the disappearances, and each evokes an Agent Smith from The Matrix-type of creepiness in their matching suits. In one they play a dramatic game of handball and in another they play exceptionally creepy ice cream men, who offer bright, notably phallic looking popsicles to audience members. In one scene a suited McManamon (who might also be the sociopathic mayor) is shown to lap at a puddle of blood while wearing cat ears and a tail. Rosete is later also convincing as a misogynistic neighborhood hoodlum, whose actions towards Anise show that the violence occurring against woman comes from not just the government. LaterRosete and Myers perform a spirited dance to a hip-hop song about bringing power to the people, showing the underlying message of the play’s darkness.

As a whole, Alondra Was Here may feel a bit thin and fragmented, although it nonetheless has its moments of strength which can be credited in part to a strong cast. Joniece Abbott-Pratt and Lolita Foster give particularly strong performances, showing characters who are both strong and vulnerable. Christopher Myers and Mike Rosete also show great range as they tackle multiple characters and succeed at audience interaction. Playwright Chisa Hutchinson, who received praise in the past for her play She Like Girls, creates compelling material here, but it doesn’t have the same strength as her previous work. This show conveys a lot of talent and potential, not to mention great ingenuity in its staging, but perhaps it could be used to create a more memorable, cohesive piece.