Zelda at the Oasis 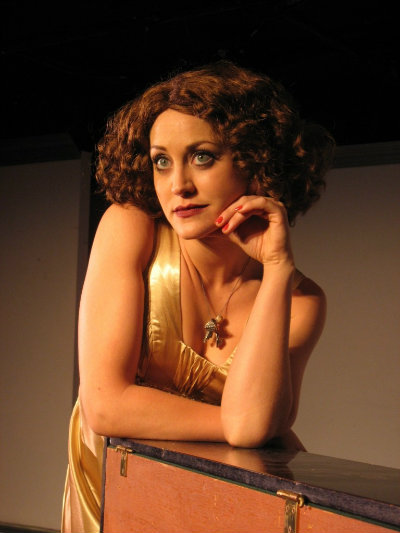 Gardner Reed as Zelda Fitzgerald in ZELDA AT THE OASIS. Photo by Carol Rosegg.

BOTTOM LINE: A story about a single night in the life of Zelda Fitzgerald (wife of F. Scott) that features an absolutely dazzling performance.

Zelda Fitzergald’s life was fabulous, tragic, and rather short. Married to F. Scott Fitzgerald, who was both a literary champion of the roaring '20s and a notorious party boy, Zelda embodied the glamour of her glittery era more than almost anyone, but she was also plagued with addictions and nervous breakdowns. At the age of 47, she died in a fire at a sanitarium where she was institutionalized.

The scope of Zelda Fitzgerald’s life is condensed into the events of a single night in P.H. Lin’s new play Zelda at the Oasis. Late one night in 1934, the barkeep (Edwin Cahill) at the Oasis club in Manhattan has a difficult time getting his last customer to leave. It turns out the woman is Zelda (Gardner Reed) and his ignorance to her fame only seems to stoke her interest in him. As she uses every charming trick she can to postpone her departure, she connects with the barkeep — who is also an aspiring songwriter — as a fellow artist frustrated by a lack of opportunity. Throughout the night, she also experiences hallucination-flashbacks, which slowly erode her confidence, revealing a desperate woman haunted by a rocky past and mental instability.

Though this plot manages to reveal much more about Zelda than it could without the flashbacks, it makes for an extremely demanding performance for Cahill who, during the flashback sequences, transforms into people from Zelda’s past — including her husband, her mother, a news reporter, and more — some of which Cahill manages better than others (interestingly, he tends to fare better with the women that with the men). It also makes for some awkward script moments. The problem Lin seems to butt up against again and again is the transition back to the current plot from Zelda’s hallucinatory flashbacks and many of these transitions, which involve Zelda screaming something at some past apparition, just don’t feel natural. The barkeep, whom Zelda affectionately calls “jellybean,” is a little too calm in the face of Zelda’s erratic behavior and the world of the play suffers for it.

However, the problems with the script are entirely made up for by Reed’s performance as Zelda, in her New York debut. Reed appears more than comfortable embodying the legendary lady through all her ups and downs, her cunning and her delusions, with something sweet in the middle. The most ready contemporary comparison is one with Courtney Love: Like Love, Zelda was the first lady of the alternative culture, wild and reckless and charming — and driven mad by standing in her husband’s artistic shadow. Zelda’s desire to be recognized as a writer herself is truly tragic;regardless of if she’s any good, no one even takes her seriously, not even her husband.

Visually, Zelda at the Oasis is near perfect. Colin McGurk's set captures the feel of a worn-in bar, loved by many. Reed’s hair and makeup are one the best stage representations of the 1920s that I’ve seen (and, like most theatergoers, I’ve seen a few) and her gold dress (costumes by Dustin Cross) is truly dazzling. Grant Yeager’s lighting has a palpable influence on the mood of the flashbacks, the sweetest of which are bathed in a rich, warm glow. The music, which consists of radio hits of the era, slips in perfectly at key moments. Cahill also plays some beautiful ditties on the piano.

For anyone interested in 1920’s American culture and particularly the Fitzgeralds, Zelda at the Oasis is a great fit. Though it’s not a perfect play, it does present a near-perfect performance by Gardner Reed. At the curtain call, she wept and smiled, the melancholy of her character still hanging around her; it brought to mind Tracie Bennett’s legendary performance as Judy Garland in last year’s End of the Rainbow on Broadway. She knew she nailed it.

(Zelda at the Oasis plays at St. Luke’s Theater, 308 West 46th Street between 8th and 9th Avenues, in an open-ended run. Performances are Tuesdays at 7PM; Fridays at 5PM; and Sundays at 7PM; with an additional performance on Sunday, December 9th and no performance on Friday, December 7th. Tickets are $37.50-$59.50 and are available at telecharge.com or by calling 212.239.6200. $20 student rush tickets are available at the box office day of show with a valid student ID and a limited number of $30 tickets are available for people under 30 years old. For more show info visit zeldaoasis.com.)