You are in an open field 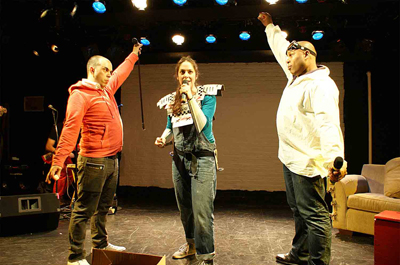 Kevin R. Free, Marta Rainer, and Adam Smith in YOU ARE IN AN OPEN FIELD. Photo by Anton Nickel.

BOTTOM LINE: An existential journey with a video game theme.

Anyone who remembers the 1980s will delight in You are in an open field, in which Atari and Teddy Ruxpin (among other nostalgia) facilitate an examination of life paths. The show’s three performers Marta Rainer, Adam Smith, and Kevin R. Free channel their inner children to the accompaniment of Carl Riehl’s spunky nerdcore hip hop band. They get thrown into an autobiographical video game that will presumably allow them to do the superhuman things they’ve always wanted to do (Marta: breathe underwater; Adam: ignite things with his hands; Kevin: fly). Things don’t always work out as planned (as they say, “such is life”) -- but life’s existential quandary keeps an optimistic bend.

Fun is at the heart of You are in an open field, and Rainer, Smith and Free are consummate tour guides of childhoods past. Before the show begins, the audience is invited to partake in chips and Mountain Dew, and even after things get started, there maintains a shared performer-audience awareness. One of the things I admire most about the Neo-Futurists, is their ability to portray self-aware characters without a hint of ego.

Throughout the show, the compelling Rainer, Smith and Free perform songs to the band’s accompaniment. Of the “nerdcore hip hop” genre, the instruments include a drum kit, a bass guitar, and a key-tar, along with a laptop providing much of the digital sound. Lyrics are at the heart of these songs, and there is a spoken word quality within the performance. I was really happy to obtain a copy of the script after the show, because these lyrics are even more compelling when you can spend more time with them: “Hear sound / Open door / Accept fate / Embrace world.”

Though there is a poetic and thoughtful intent in the work, You are in an open field is a comedic and lighthearted portrayal of its youthful subject matter. Some particularly awesome moments include the treasure hunt song (sung three times, in which the characters must play “hot or cold” trying to locate a treasure somewhere in the theatre) and a freestyle battle, which is downright impressive (particularly because the game involves the use of a random line from Waiting for Godot).

The cast of You are in an open field also includes dancer Cherylynn Tsushima to portray the various bad guys the threesome encounters. The inclusion of movement in this way is interesting -- though it feels a little contrived, it adds a dimension to the narrative that helps divert the piece from familiar basement into its necessary experimental landscape. The show also uses a narrator, played by Steven French, to guide Rainer, Smith and Free through the game, and to keep the play in recognizable theatrical territory. Hyperbolic characterizations and various silly costumes serve the show by keeping it from getting too esoteric, but this physical sensibility runs contrary to the performance choices employed by Rainer, Smith and Free. Though not necessarily bad, to me it seemed divergent.

You are in an open field is a theatrical investigation that uses a very specific era as its setting. Though undeniably entertaining for anyone (and expertly executed by cast and creative team), it speaks directly to those who grew up in the 1980s, who saw the world change rapidly with the technological boom. The existential quandaries that befall everyone are at the heart of this production, but there is a certain understanding that coalesces within those who get it when lyrics are set to the theme song from Super Mario Brothers.