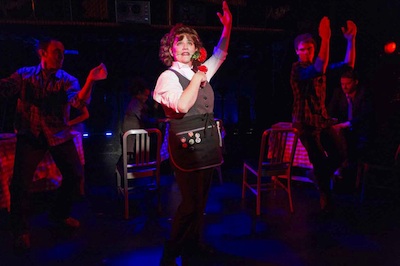 BOTTOM LINE: This new version of the 1978 musical Working resonates with contemporary worries about unemployment and finding satisfaction at work; it also happens to be one of the best musicals so far this season, on or off Broadway.

Admittedly, Working may not seem the most inviting title for a musical (which may explain why this show only saw 24 performances in its initial Broadway run back in 1978). Don’t let the title, or subject matter, fool you, however: Working is incredibly human and deeply moving, and features six extraordinarily talented performers. This is definitely a must-see production.

Based on Studs Terkel’s eponymous book of interviews with everyday Americans about their jobs, Working is not a full-fledged book musical, but a collection of monologues and songs highlighting jobs as diverse as waitress, teacher, ironworker, hedge fund manager, and prostitute. Stephen Schwartz and Nina Faso originally wrote this as a two-act musical for a cast of 17 (including Patti LuPone in the original cast). Schwartz and Faso, with the help of director Gordon Greenberg, have streamlined this material into a seamless 90-minute piece for 6 people. They have added two new songs (by Lin-Manuel Miranda, of In the Heights fame), cut several numbers, and subtly updated some of the original material to reflect the realities of 2012. (For example, the school teacher’s complaint that “we confiscate weapons and drugs at the door” would hardly have made sense in 1978). The updates are probably unnoticeable to anyone not familiar with the original recording. Rather, what comes through is the timelessness of the material.

Miranda’s two numbers fit right in with the rest; credit is largely due to Alex Lacamoire, who is this production’s orchestrator and arranger. I especially enjoyed “Delivery,” about one man’s joy in getting to escape the confines of his dreary fast food restaurant to venture out into the city. “Delivery” has Miranda’s signature warmth, enthusiasm, and humor, and Nehal Joshi does a terrific job at capturing Miranda’s infectious energy.

The other five performers are equally outstanding; indeed, it is difficult to choose a standout. I’ve always been a big fan of Donna Lynne Champlin, who can often command hysterical laughter with even the smallest line (witness what she does here with her “woman in cubicle” role). Champlin’s song as the school teacher is quite lovely, but her triple-threat skills are most evident in “It’s an Art,” in which she deftly waits on (and dances around) an ever-changing series of restaurant tables (one of director Greenberg’s best moments, in terms of staging).

Jay Armstrong Johnson sings “The Mason” beautifully. As a factory worker stuck in a dreary job making luggage, Marie-France Arcilla’s rendition of “Millwork” is haunting and unforgettable, and choreographer Josh Rhodes’s assembly-line movement is extremely effective in its simplicity and precision. Kenita R. Miller has several key moments; perhaps my favorite is her song “Just a Housewife,” in which she expertly embodies real-life housewife Kate Rushton’s conflicting feelings of shame and pride about her work. And Joe Cassidy’s performance of “Joe,” about a retiree recounting the ways he fills his eventless days and his memories of his (slightly) more exciting youth, is heart-breaking. Cassidy is tremendous throughout, but his “Joe” made me wish I could pause the show just so I could sit in that blissfully melancholic moment a bit longer.

Although I normally cringe at this kind of sentiment, this cast is extraordinarily diverse in every way possible -- age, size, gender, and race. I presume this was a conscious choice on director Greenberg’s part, perhaps to reflect the diversity of people at work in the U.S. today. Greenberg’s staging is always fluid, and he finds a variety of uses for rolling tables and chairs, which are the primary set pieces in Beowulf Boritt’s elegantly simple set. I also have to applaud Greenberg for highlighting a few other jobs through his staging. As the audience enters, the cast is hanging out in an on-stage dressing room, complete with scripts, bare light bulbs, and wig heads. And as the show begins, the stage manager’s first few cues (“Video 3. Go.”) are audible. This is a subtle touch, but it pays homage to the fact that, while those of us in the audience may be enjoying a night out at the theatre, our enjoyment is provided by people who, while they may be doing what they love, are nevertheless working.