What Rhymes With America 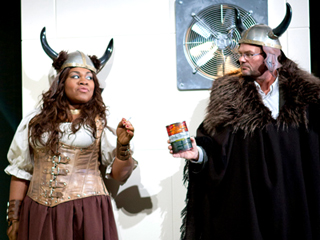 Da'Vine Joy Randolph and Chris Bauer in WHAT RHYMES WITH AMERICA. Photo by Kevin Thomas Garcia.

BOTTOM LINE: An intriguing, though tricky, exploration of four characters searching for connection and hope in a cruel world.

Hopeless Hank often finds himself standing outside the house he once shared with his wife and daughter, Marlene. Now, after the divorce, his wife has cut off communication and forced her daughter to do the same, but the two do communicate from time to time through the front door of the house. These unsuccessful attempts at human connection have become the status quo for Hank, both in his family life and his love life, and the only hint of connection he can find is in the unlikely smoke-break friendship he has formed with his coworker, Sheryl. And don’t hold your breath for things to get any better.

As Melissa James Gibson’s What Rhymes With America begins, Hank and Marlene speak through the (invisible) door, and the thematic heavy-handedness of Gibson’s script begins its 90 minute comedic wallow in the misery that is the human condition. Hank, played by Chris Bauer with a valiant effort despite a tricky script, is not a man trying to improve his condition; he is a man who does not seem to possess the ability to change, which might be an interesting concept had Gibson provided a substantial arc for any of the characters around him; unfortunately, this isn't the case.

And it’s a shame. Gibson can craft (and has crafted) some intriguing drama, and each scene of America is compelling, full of dark humor and heart. Under Daniel Aukin's direction, we root for these characters, and by play's end, we desperately hope for change as much as they do. But the characters' poor decisions and lack of resolve presents instead a sort of stagnant, flat view of reality. We don't necessarily want these characters to succeed; we just want them to attempt.

As possible love interest Lydia, Seana Kofoed is a joy to watch as the charmingly neurotic 40-something-year-old virgin archetype. Kofoed is a pro, and though the script doesn't take full advantage of this quirky character, Kofoed finds every conceiveable level and presents them all. The same can be said for the greener Aimee Carrero who is able to pull some life out of the moody “life sucks” Marlene. Carrero at least gets to practice her stage cry, and she even manages to make the near-resolution in the end a bit more believable, approaching moving.

But these three characters (I’m saving the fourth for a bit) are stuck in the rut Gibson has created in the dialogue. America oftens finds itself too clever by half, and these characters' have far too similar voices, consisting of a choppy, neurotically-hip cadence of interrupted non sequitors followed by witty retorts which seem to promote a current, stylistic playwrighting choice instead of anything natural to the characters. The voice only seems to work for Lydia, which makes it all the more glaring when we hear Hank and Marlene speak the same way.

An unemployed New York City economist, Hank takes a job as a supernumerary in an opera. Gibson asks us to suspend our disbelief quite a bit with this plot point, but in these backstage-at-the-opera scenes, she thankfully gives us the most compelling character in the play. Da’Vine Joy Randolph’s Cheryl is a spear-carrier with her sights set on leading lady. A kindred spirit with Lady Macbeth, Cheryl has been pushed around by the biz and is at the end of her rope knowing that her career has landed her on the same level as out-of-work economists. But she is a force, and through Randolph’s character work, she adds electricity to the production. With each entrance, she is a desperately needed breath of fresh air.

Aukin seems to throw his attention to the dense script (as well he should), and, as a result, there are some missed opportunties. The actors are rarely able to escape cadence traps in the dialogue, and the blocking sees them moving awkwardly around the far-too-spacious and obstacle-free set design by Laura Jellinek. Initially striking in its sterility, Jellinek’s scenic focus is split among various locations, giving the majority of the stage space to a location visited only once and restricting the actors to the downstage space where they often play to the audience instead of each other. This oddly-large playing space is accented with design tricks, some successful (an abrupt loading-deck door reveal) and some simply bizarre (go-go-gadget pay phone cord).

As Lydia puts it, “Words are little fuckers,” and those little buggers certainly provide some tricky traps in this script, especially in the somewhat-forced justification of play’s title. More of a snapshot than a full story, the intertwined stories come and go leaving little effect on their own lives or each others's, and by the time the show ends, one wonders if the stories were all just arbitrary. But to Gibson’s credit, the darkly-comic characters’ one-liners do keep the audience laughing, and it is only after the abrupt ending that the patrons, like me, will begin to realize that America is a play that seeks to rebel against convention. I’m all for rule-breaking, but the stagnancy of the characters doesn't quite achieve anything poignant or profound for me, and I instead felt a sad sense of frustration. Then again, maybe that was the goal.

(What Rhymes With America plays at the Linda Gross Theater, 336 West 20th Street between 8th and 9th Avenues, through December 30, 2012. Performances are Tuesdays through Saturdays at 8PM; and Sundays at 3PM and 7PM...no Sunday 7PM performance on December 23rd). Tickets are $70 and are available at ticketcentral.com or by calling 212.279.4200.)