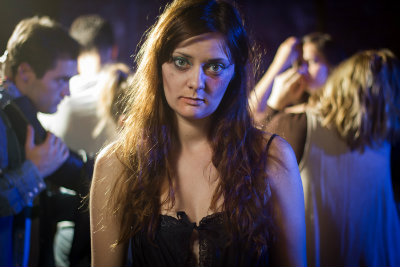 BOTTOM LINE: An interactive, site-based piece of theatre that is fun and cheap, but far from horrifying.

Ever since I experienced Sleep No More, the site-specific and innovatively interactive theatre piece that New York theatre-goers have been guzzling up for the past year and a half, I’ve been anticipating its influence. The idea of un-anchoring theatre from the confines of the stage to explore the rooms and corridors and closets held within the array of spaces that New York has to offer feels like standing at the threshold of a theatrical goldmine.

Ugly Rhino Productions’ Warehouse of Horrors: Gowanus ’73 is incontestably a child of the Sleep No More influence, touring its audiences through the gutted-out space of the former Public Bath 7, now the Brooklyn Lyceum, and telling them the story of a rave party, turned multi-murder scene, that purportedly unfolded in that very space in 1973.

Entry into the world of the show is deliciously gentle. Audience members are given a program (which includes three drink tickets, included in the $20 admission), directed to the Lyceum’s massive open warehouse space, and encouraged to get a drink at the bar. Mingling with a plastic cup containing some kind of so-so vodka punch in my hand and uncertain of whether I was supposed to sit in one of the clearly insufficient number of chairs or just stand around, I started to get the feeling that some of the people around me were acting. Yet again, their subtle ‘70s garb was also passable as everyday Brooklyn hipster wear. Had I been more engulfed in conversation, I may have failed to notice that the first scene (the rave party) was happening around me.

For the rest of the show, each audience member is assigned to one of five tour guides. My guide was “Ocean” (Lia Tamborra), the ghost of a hippie-ish, blue haired dead girl who claims to have died at a party in the warehouse a few years before the events of the play. Ocean is only somewhat entertaining and a little flat as far as characters go, but proficient enough at her job of ushering us from room to room to watch the series of scenes unfold.

This audience ushering is probably the most impressive thing about Warehouse of Horrors, as each group bears witness to about a dozen key scenes, but no two groups experience them in the same order. Remarkably, the continuity is not lost in this shuffle due to some clever writing and directorial choices (Bryce Norbitz, Nicole Rosner, and Danny Sharron share those duties).

What emerges is the story of the mobster/building owner named Dominic (Michael Bernstein) and his “front man” Nick (Harrison Unger), who has discovered a new drug called “scopolamine” that suspends the memory and induces a zombie-like state of obedience. Dominic is weary, but Nick sees this as an invaluable addition to their popular underground “rave” parties, complete with prostitutes, that they often use to entertain important business partners. Things get messy when Nick uses the drug on the wrong girl (Jennifer McVey) and her friend (Kaitlin Lawrence) comes looking for her.

Overall, the story holds, the dialogue is appropriately mobstery, and the acting is passable-to-exceptional (with Lawrence and Unger on the more exceptional end) — all good enough for a play that’s meant to be campy. At times the show loses momentum (probably a compromise with the ushering) and there are a few writing missteps (my intuition suggested, and a little research confirmed, that “rave” was not a term used much in the 70’s), but these are easily forgivable.

The greater obstacle to a truly immersive experience is that Warehouse of Horrors just isn’t that scary and this is mostly due to some miscalculations in creating ambiance. Sleep No More, with its massive budget, sets the bar almost unattainably high in this category and we can’t expect a low budget piece of interactive theatre to create that kind of all-encompassing atmosphere (which even Sleep No More, in my opinion, doesn’t totally nail). However, with some different choices Warehouse of Horrors could more easily live up to its title within the same budget. The most obvious choice would be to significantly lower the lighting, maybe even throw the audience into some kill-the-lights-blackout moments, because we all know that darkness is the key ingredient in fright. Most of the experience is just too well-lit to be scary. For those looking for a theater-meets-haunted house (I was, and this is how the show is advertised), this show won’t deliver; conversely, if you’re not a fan of haunted houses (like my date who canceled when I told her the show included one), you should be fine.

If you have the right expectations, Warehouse of Horrors can be a fun and different choice for a date or outing with friends. The Brooklyn Lyceum is beautiful and a little creepy and definitely worth seeing. The show moves you around too much to be boring, you drink for free, and the price is incredibly affordable. Still, I would gladly pay a little more for a scarier experience — and I’m thinking about forking over $30 to one of the city’s actual haunted houses to get it.

(Warehouse of Horrors: Gowanus '73 runs at the Brooklyn Lyceum, 227 4th Avenue, through November 1, 2012. Remaining performances are October 26, 27, 30, 31, and November 1 at 8PM. Tickets are $20, including three cocktails, and can be purchased by visiting vendini.com. For more show information visit uglyrhinonyc.com.)