The Wundelsteipen (and Other Difficult Roles for Young People)

Off Off Broadway, New Short Plays
Runs through 5.23.12
The Flew Theater, 41 White Street 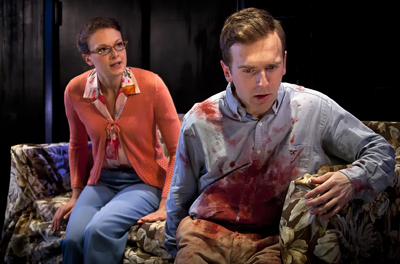 Maren Langdon and Alex Herrald in "Super Supportive Family," part of THE WUNDELSTEIPEN.

The Wundelsteipen (and Other Difficult Roles for Young People) is a hilarious two-hour event, in which a cast of eight good-natured actors perform seven short plays about young people (babies through the college-aged). Some of these plays are riffs on classic literature ("Everybaby," which takes the medieval morality play "Everyman" and makes its protagonist an infant in a onesie). Some of the plays are fractured childhood tales that subvert our understanding of what it means to be a kid (the titular "Wundelsteipen" is a sex fairy who visits pubescent boys). And some of the plays merely explore family relationships (we see just how supportive very supportive parents can be in "Super Supportive Family").

This entertaining production offers the perfect storm of awesomeness: Nick Jones's very funny plays that nearly go too far; Tom Costello's smart direction that reigns in the humor just before it crosses a line; and a wonderful cast who are fully committed to a collection of ridiculous characters and situations. The result makes for a dynamic, cohesive experience. Since the plays are short and based on a set-up or a gag, they maintain a "sketchy" quality, particularly when it comes to plot development. The fullness of the characters (and the characterizations), however, keep it from being flippant. The cast and creative team offer a sincere approach to these works, and that strong foundation lets the humor simmer deliciously on top.

In the tiny downstairs theatre at The Flea, cast members Maren Langdon, Donaldo Prescod, Dominic Spillane, Tommy Crawford, Hannah Corrigan, Eric Folks, Alex Herrald and Briana Pozner indulge in Jones’s very silly plays. Even the scene changes have a sense of ironic awareness. These plays are well served in the intimate space, where a sort of haphazard aesthetic approach adds to the scrappiness inherent in the evening. The Wundelsteipen is a great choice if you’re looking to laugh, and a great reminder that the magic of theatre can illuminate comedy as well as drama.