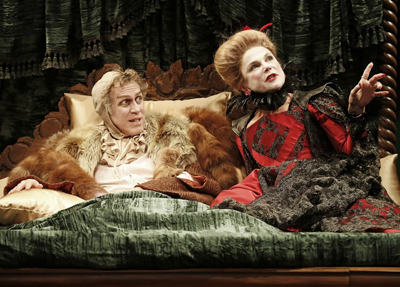 BOTTOM LINE: A delightful production of a rarely produced comedy from one of Shakespeare’s sassy contemporaries.

Ben Jonson was a bit younger than Shakespeare, but they shared a profession and a similar style in the late 16th century / early 17th century in England. Jonson’s ego was also larger than Shakespeare’s -- at least, that’s how he’s remembered a few centuries later (and across the Atlantic Ocean). Sort of a misogynistic bully, he liked to pick fights...you can find great stories about his feuds with rival playwrights...and you can certainly spot his sass in his work.

Red Bull Theatre’s new production of Jonson’s 1605 comedy Volpone is a spot-on representation of a centuries-old piece of theatre wisely presented for a contemporary audience. It’s not modernized, but it takes a modern audience into account, and it relishes in its sense of humor. Directed by Red Bull’s founding artistic director Jesse Berger, the production never takes itself too seriously, though opulent costumes (by Clint Ramos) give the story the air of grandeur it seeks.

Volpone takes place in Venice, and the titular character resides in ultimate luxury. He’s also a scam artist, hence his wealth. Played with weasely amusement by the very funny Stephen Spinella, Volpone gets what he wants. Mosca (the perfectly devilish Cameron Folmar) is Volpone’s right-hand man, and the two are involved in a plot that has been swindling some gold-digging locals.

Volpone feigns sickness, and because he doesn’t have a rightful heir, three mean vie for the position by bringing Volpone gifts from their own coffers. Voltore (Rocco Sisto), Corbaccio (Alvin Epstein), and Corvino (Michael Mastro) all think they have it in the bag -- problem is, Volpone isn’t even sick. Fine Madam Would-Be (maybe one of the best character names in theatre history, played by the very entertaining Tovah Feldshuh) also wants in on the action. Volpone can keep them all at bay while accepting their gifts, at least for a while, until Corvino’s beautiful wife Celia (Christina Pumariega) comes into the picture and Volpone gets very distracted.

Red Bull’s production of Volpone relishes in the humor of its inflated characters and quick-paced comedy. To add to the theatricality of a play whose intention is pure entertainment, live music (composed by Scott Killian) threads through the production. Sometimes performed as songs with lyrics and sometimes there to add ambiance to a scene, the incorporation of music very successfully sets the tone and the production is even sillier because of it. Volpone’s trio of misfits Nano the dwarf (Teale Sperling), Castrone the Eunuch (Sean Patrick Doyle), and Androgyno the hermaphrodite (Alexander Sovronsky) perform most of the musical numbers, accompanied by Jen Eden and Pearl Rhein.

Classical theatre can be a hard sell for a contemporary audience, but when it’s done right there’s no temporal caveat needed to enjoy the production. Red Bull excels at bringing old scripts to life without compromising their original intent. Volpone’s comedic narrative of manipulation and greed is totally worth seeing today; there is much to enjoy in this amusing production.

(Volpone plays at the Lucille Lortel Theatre, 121 Christopher Street, through December 23, 2012. Performances are Tuesdays through Thursdays at 7:30PM; Fridays at 8PM; Saturdays at 2PM and 8PM; and Sundays at 3PM. Tickets are $20. To purchase tickets visit redbulltheater.com or call 212.352.3101.)