Us: A Progressive Love Story 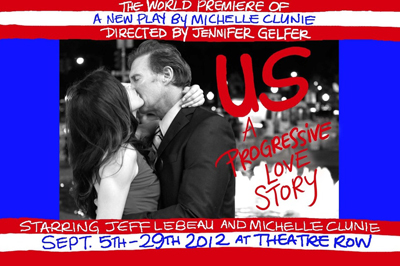 It’s supposed to be a big night for the unnamed male protagonist (Jeff LeBeau) in Michelle Clunie’s Us. A left-leaning politician, he plans to take the stage that evening and announce that he is running for U.S. Senate. He’s totally stoked, at least until his girlfriend Maggie (Michelle Clunie) arrives home, clutching a large envelope and screaming her head off. Turns out the package was sent to her by Kim, a woman with whom LeBeau has had a longstanding sexual dalliance.

“You fucking asshole prick, fuck you, fuck you, fuck you,” Maggie — we later learn that the man calls her Boo in lieu of her actual name — screeches. “Try not to lie, try to have a droplet of integrity, a droplet,” Boo continues. For his part, the man stammers, making excuses, blaming Kim and accusing her of stalking. His banter doesn’t fly, of course — and when Boo admits to rifling through his emails and reading the less-than-flattering comments he’s written about her — things turn increasingly ugly.

There’s tension here, and angst. But despite Boo’s overt fury, the man begs her to put her reaction on hold until after he announces his candidacy, telling her that he needs her at his side. After all, he’s divorced, so having a gorgeous woman beside him is almost required. “I thought you were my Hillary,” he quips. This entreaty presents a quandary for Boo. Will she be a “good girl” and smile for the cameras, or will she walk away, leaving him to campaign alone? As this conflict plays out, Us uses back-screen projections to depict the couple’s earliest dates. It’s an effective tactic, and designer Adam Rhyne has done a terrific job of creating a photomontage to supplement the characters’ nostalgic reflections on their courtship.

Set during the 2008 Obama campaign, both were passionately hoping — and working — for a Democratic victory. While Boo initially favored Clinton, she quickly became an ardent Obama supporter, traveling the country to stump for him. Unfortunately, when the two discuss their political ideals, the conversation sounds more like an exchange of stump speeches than the dialogue of lovers. “When Bush stole the election, this blatant evil corruption that tore the fabric of our country, it fired me up, propelled me to engage,” Boo tells the boyfriend. “When minorities, women, immigrants, young people, the elderly, people being foreclosed see their commonality, it will be the America we believe in.”

Throughout Us, cell phones ring and the couple’s past-and-present encounters are repeatedly interrupted by calls and texts, as if every matter is urgent and requires immediate attention. Is this a comment on our inability to be in the moment? A cautionary tale about misplaced priorities?  A warning about distractions?

Yes, it’s probably all of the above. As for love in what the playwright calls “the age of constant media and technology,” Us is a stark reminder that there is nothing progressive about people treating each other badly or philandering, no matter how liberal their professed beliefs. Indeed, contemporary social references and electronic gadgets aside, this is an old and distressingly familiar story.  In fact, it’s exactly as late twentieth century feminists claimed 40-plus years ago: The personal is always political and, at the end of the day, who one is in private is as important as who one is in public.