The Thrill of the Chase 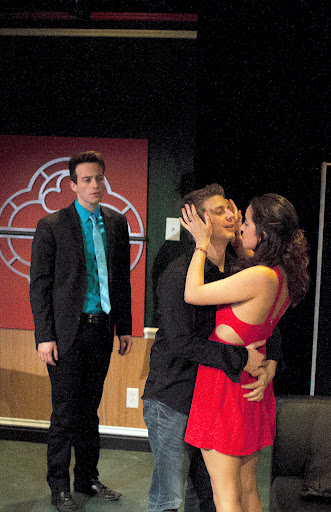 Ryan Barrentine, Kevin O'Callaghan and Jenna D'Angelo in THE THRILL OF THE CHASE. Photo by Julia Kinnunen.

BOTTOM LINE: A gritty, brutal play that falls short in seeking to explore the more depraved underbelly of what passes for masculinity and sexual politics. Well acted but somewhat disappointing.

In the program notes to The Thrill of the Chase, the play’s production company, Mad Dog Theatre Company, describes itself as “a group of artists who tell stories….that are funny, ferocious, unlikely, sexy, rough, inconvenient, loud, unsightly, and -- ultimately -- provoke questions.” If so, Mad Dog partially fulfilled its mission in its production of The Thrill of the Chase, but only partially. To be sure, the play is ferocious, unlikely, rough, inconvenient, loud and unsightly. But it is not at all funny and you’re unlikely to find it sexy either (unless your sexual proclivities extend to the sadistic). And the only question it provokes is: Why did Philip Gawthorne, the playwright, have to spend two and a half hours to tell a story that might easily have been told in an hour and a half?

Charlie (Kevin O’Callaghan) is a lazy, selfish, cruel, misogynistic womanizer in his late twenties. His wealthy father has given him a penthouse apartment in which he can drink beer, shoot pool, smoke weed, do Johnnie Walker shots, snort coke, entertain his girlfriends and revel in the psychological pain he causes them when, inevitably, he ceremonially and sadistically dumps them. He shares his luxurious bachelor pad with his childhood best friend, Nicky (Ryan Barrentine) who, unlike Charlie, holds down a full time job and is in a committed relationship with his somewhat eccentric vegetarian girlfriend, Izzy (Nicole Samsel). Charlie dominates the more mild-mannered Nicky and, when Nicky announces that he plans to marry Izzy, which threatens to bring an end to the two roommates’ shared bachelorhood, Charlie determines to stop at nothing to derail Nicky’s and Izzy’s marriage plans. To that end, he enlists the aid of Faith (Jenna D’Angelo), the fourth member of the play’s ensemble.

The play’s conceit is not an original one and it is not developed in any new, unusual or creative manner. Admittedly, there are twists and turns but they are mostly anticipated (indeed, in some cases even telegraphed) and I didn't find them very surprising. And all four actors come across more as caricatures than fully fleshed out individuals.

The play’s press release asserts that “Following in the tradition of David Mamet and Neil LaBute, The Thrill of the Chase is a brutal, uncompromising, and darkly comic exploration of masculinity and sexual politics,” and I guess there’s some truth to that: the play is brutal and uncompromising and it does, in a way, seek to explore the more depraved aspects of what sometimes passes for masculinity and sexual politics. But, unfortunately, this play needs more work with plot structure and character development for the audience to be adequately rewarded for sitting through an otherwise disturbing work. Hopefully, Gawthorne, who has been named one of the United Kingdom’s top ten writers under thirty by “Broadcast Magazine,” will make it into Mamet and LaBute's company someday but The Thrill of the Chase isn't quite there yet.

Given the hands they were dealt, all four actors play their roles admirably.

(The Thrill of the Chase plays in a limited run through March 4th, 2012 at The Drilling Company Theatre, 236 West 78th Street between Broadway and Amsterdam Avenues. Performances are Thursdays through Saturdays at 8PM and Sundays at 2PM. Tickets are $18 and can be purchased at smarttix.com or by calling 212.868.4444.)