The Three Seagulls, or MASHAMASHAMASHA!

By Jaclyn Backhaus (after Anton Chekhov); Directed by John Kurzynowski 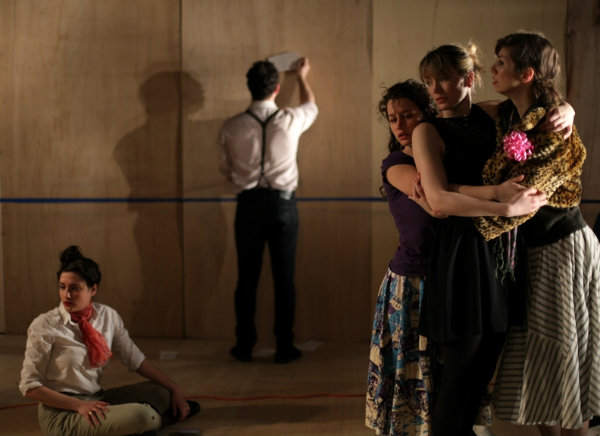 BOTTOM LINE: The Three Seagulls is a raging success and great time waiting to be had.

The Three Seagulls or MASHAMASHAMASHA is a tongue-in-cheek mash up of Chekhov’s The Three Sisters and The Seagull written by Jaclyn Backhaus, featuring a mammoth cast of 24 young actors under the daring direction of John Kurzynowski. The look of the space and the people is very Billyburg comes to SoHo, but that’s perfect for HERE because Willywick is the new downtown.

Backhaus’s cunning script collapses similarities between the two Chekhov plays, allowing the two worlds to fall into one another along shared lines of language, theme and characters. The result is ingenious, uproarious, and inviting. From the start, the audience is invited to be part of the joke and remains in the folds of the charming performance for the duration.

A large portion of the cast is already present when the audience enters, warming up and generally playing together on the stage. It’s a little overwhelming at first, but soon being steeped in this buzz of actors heightens the observers’ energy and gets the audience amped for the show. The band of young, attractive actors is having so much fun, and being so clever, that everyone in the room wants to be part of this game. A narrator reads from the “script” to introduce the audience to the action, and the metatheatrical text and staging throughout keep the audience invested and involved on a more visceral level.

The Three Seagulls is the ultimate theatre inside joke, not to say that someone unfamiliar with Chekhov couldn’t enjoy the physical comedy. The performance is a quick, sometimes farcical romp through Russian melodrama, familiar characters, and splashes of contemporary identity. The outrageous and evocative episodes are threaded together by the unexpected and the absurd, with dramatic lighting shifts and a phenomenal sound design by Kate Marvin. That’s worth repeating -- I’m amazed by the brilliant sounscape of this production.

Expectedly, Jaclyn Backhaus charms in the grandiose role of Arkadina. The lovely Kelly Rogers (Nina) shows herself an adept comedienne at the start, then reveals dramatic prowess in her touching final scene with Konstantin, played by the dramatically astute Matt Carr. The character of Natasha is redeemed in Caitlin Bebb’s hilarious portrayal. And as Irina, Leigh Jones triumphs first as silly and then as sincere, stealing a moment of showtime when she sings her sad, senseless song.

The Three Seagulls is a thoughtful, astute, and invigorating performance by a sensational, energetic cast that never stops. The staging, seamless design, and flawless ensemble work reveal this show as a directorial tour-de-force by John Kurzynowski. This script and its execution represent the kind of premium quality production that comes from a fruitful and synergetic collaboration between writer and director.

The Three Seagulls is a must see for any Chekhov lover or follower of indie theatre. This fabulous production signals Theatre Reconstruction Ensemble and its members as up-and-comers to watch in years to come. Go see it!