The Terrible Manpain of Umberto MacDougal

By Emleigh Wolf; Directed by Bricken Sparacino
Part of the 2012 Frigid Festival 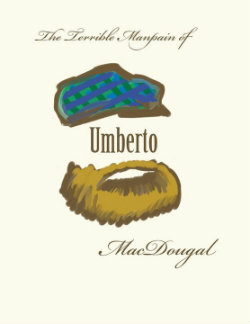 BOTTOM LINE: A silly-somber plea for acceptance and understanding, which warms the bearded, tartan cockles of the heart.

Have you ever been impelled to write bitter but perfectly rhymed couplets while sitting next to your window, tears streaming down your face? Have you relished a thunderstorm, feeling that Mother Nature was displaying her understanding for your pain? Are you big, burly man (or supporter of one)? Then Emileigh Wolf’s The Terrible Manpain of Umberto Macdougal, is for you! Catch Umberto’s remaining support sessions now at Under St. Marks as part of the 2012 New York Frigid Festival.

Umberto Macdougal is not your average man. This fact is not merely due to the “tits” he’s had troubles with all his life, nor due entirely to the full beard he sports, which, also, has plagued him since pre-adolescence. No, Umberto is a not your average bearded, bespectacled man about town because he is very, very, very in touch with his manpain. That tear-inspiring, socially unacceptable pain that other men feel compelled to hide, Umberto proudly proclaims as though it were just another part of his tartan wardrobe. And thanks to his own unabashed acceptance of his pathetically melancholic temperament, Umberto is on a mission to show other men that they, too, can be proud to be in touch with their own manpain.

Wolf, who plays Umberto herself, has concocted an unrelentingly self-deprecating script in a quasi-support group storytelling, and coupled it with just the right number of pitiful props, like an oversized journal and amusingly heartbreaking plate of tiny cookies. At just under an hour, the gut-wrenching and miserable manpain Umberto displays and discusses doesn’t wear thin, nor does his generally laudable Scottish accent. Though his "aged guitarist friend," Mike, played by Scottish musician Mike Ogletree, who underscores the proceedings with melancholy guitar-playing, steals the show a bit with his charm and authentic accent, and a number of the best lines.

In Umberto, Wolf has crafted a character as enjoyable as he is sad, and thanks to director Bricken Sparacino’s tight construction, no emo moments linger long enough to let the laughter completely die down. And though Wolf doesn’t entirely taking full aim at gender stereotypes and social norms, she offers, perhaps, the seeds of a larger discussion, firmly couched in the bosom of a deplorably likable character. Regardless of the takeaway, however, Wolf’s Terrible Manpain certainly takes away life’s other cares while Umberto tells his absurdly unfortunate life story.