Take What Is Yours 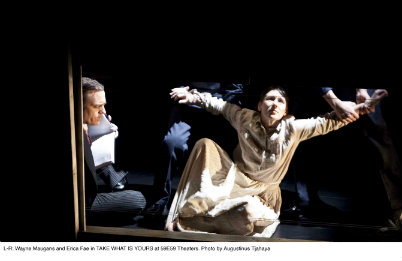 Wayne Maugans and Erica Fae in TAKE WHAT IS YOURS. Photo by Augustinus Tjahaya

BOTTOM LINE: This powerful historical play sheds light on the little known story of suffragette Alice Paul, aided in part by a well written script and an astounding performance from Erica Fae.

Take What Is Yours proves that the story of women winning the right to vote is one too often glossed over in history text books. While Susan B. Anthony made her name in history by breaking the law and voting, even when her gender forbade her from doing so, little else is taught about the other women who devoted their lives to the cause of women gaining the right to vote. Take What Is Yours pulls back the curtain on the darker side of the story of the women’s suffrage movement, showing just how much suffering these women endured simply to be able to vote. This powerful, moving play sheds light on an era when women were viewed as inferior creatures that needed to be, as anti-suffrage documents proclaimed, “protected from themselves.”

The play opens with actress (and playwright) Erica Fae as suffragette Alice Paul locked in a jail cell. She sits hunched over on her prison bed as she is days into a hunger strike. She, along with several of her fellow suffragettes, have been arrested for the charge of “obstructing traffic,” which stems from the woman picketing in front of the White House. We later learn that these protests have not been peaceful. Paul states that once the police finally stop attacking them they “permit the crowd to do so.” The protestors are beaten, struck down, and dragged by men whose anger at the very idea of women gaining the right to vote turns them to violence. The physical pain the suffragettes suffer on the streets pales in comparison to the many tortures that await them in prison.

Paul now sits in a jail cell for her actions, refusing to wear the prison uniform and refusing to eat any food. Despite her physically weakened state, she proves herself to be of unbreakable spirit. She is interviewed by a character known simply as “Man” (Wayne Maugans). While he initially seems to be flippant and dismissive of Paul, asking “Does this case talk?” he later seems to be a potential ally or receptive audience to her tales and woe. As their conversation begins, tension quickly builds. Paul’s prison bed and the Man’s chair begin to circle around one another while suspense-building sound plays, skillfully orchestrated by sound designer Kristin Worall. As they converse, we learn of the three generations of suffragettes in Paul’s family, all of whom spent their lives fighting for the right to vote. “Isn’t three generations of women enough? Three generations who might have done a thousand other things with their lives. We are determined to shape history so that our daughters may work with the vote, not for it,” says Alice. Later we see the insurmountably evil Dr. Gandor send Paul off to the psychiatric hospital where he and other men treat Paul’s body like it is their property. “You think you rule this place don’t you, but I will show you now who is on top,” he says. Gandor and the other men in the hospital seem to see their control of Paul’s body as a means of controlling the female gender, at a time when gender roles are being challenged. During a particularly frightening scene, Paul stares out at the audience through the window of her cell in the psychiatric ward, fruitlessly pounding away, her eyes wide with fear and desperation.

In other scenes projections are flashed across the stage of the suffragettes protesting and of the legal documents arguing against the nineteenth amendment. The documents’ listed reasons are both laughable and sad, offering such reasons to oppose women’s right to vote as: “women must be protected from themselves” and “no man would marry a suffragette.”

The show’s story offers a side of the suffragette movement rarely seen, fleshing out a blip in history into a full-on battle. The story's power might have been even stronger had more stage time been given for the characters besides Alice Paul and the “Man.”

Overall, Take What Is Yours is a powerful and moving work, giving suffragette Alice Paul her dues, as well as showcasing the immense talent of writer and actress Erica Fae, whose acting ability is great enough for her to portray both Paul as well as those who send her off to her jail cell. Above all, the work shows the long and painful fight that first-wave feminists fought for women to have the rights that they do today.