$30 for seniors and children 17 and under 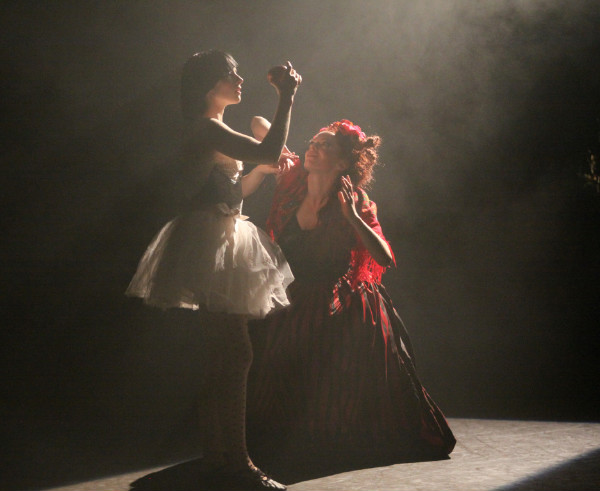 Gracie White as Snow White and Laura Careless as the Evil Queen in SNOW WHITE. Photo by Steven Schreiber.

Company XIV’s 2009 presentation of Austin McCormick’s Snow White was such a runaway success (winning critic’s picks and award nominations) that the company has remounted the production with new text by Jeff Takacs, and if you go to show, you’ll see why. Snow White is a remarkable feat of theatre and invention, skillfully interweaving dance, opera, acrobatics, aerial, projections, and design to create a perfect storm of performing arts.

Immediately upon entering the theatre, it is clear that this show is something special. The high, open space is fixed with a fantastical set including a silver tree with branches artfully hung from the ceiling opposite two opulent chandeliers. White fabric is perched aloft at the ready. There is a promise of something clever, gaudy, and grand waiting just on the other side of 7PM.

And McCormick’s creation delivers just that. Inspired by the Grimms’ fairy tale of the same name, this Snow White is a lush, polished, fresh presentation with gorgeous design. The stunning visuals meet McCormick’s magnificent staging to create captivating vignettes. Any given moment of Snow White could be a glossy photograph, and the sum serves as a real-time enchantment.

McCormick takes the opportunity of a familiar story to creatively riff, bringing about a truly exciting and exceptional show. Children’s theatre is so important because it serves as an introduction to a younger audience; Snow White takes this a step farther, giving the delighted young people in the house a taste of something truly artful. So artful, in fact, that adults like it even more (or this one did)!

As is frequently the case with children’s theatre, Snow White is introduced by a narrator (Jeff Takacs) who guides the audience through the story and occasionally steps into roles when necessary. He is the MC and host of the evening.

But the show really begins with the first picturesque assemblage of performers. After a brief introduction to the plot, the players sweep into place around singer Lauren-Michelle Criddle, and the audience gets a first taste of the dulcet tones of her rich soprano as she sings a heart-rending “Come Away Death.” This is also an amuse bouche for the striking lighting design by Gina Sherr’s and Olivera Gajic’s sumptuous costumes, which are a star of the show into themselves culminating in Lauren-Michelle’s unforgettable Galleon Hat. As the show progresses, the performance folds in the full abilities of Circus Juventas’s outstanding acrobats and Corey Tatarczuk’s satiny projections used sometimes as part of the scene and sometimes as storytelling.

This indomitable cast is made up of highly skilled dancers and acrobats whose physical prowess is matched by sparkling performance quality. Heading this ensemble are Circus Juventas transplant Gracie White as Snow White, singer Lauren Michelle Criddle, and the mesmerizing Laura Careless as the Evil Queen.

Laura Careless is a phenomenon. Her presence on stage is spell-brinding; even amidst the full cast she catches the eye. This woman is a star.

This brilliant theatrical experience is a must see, and well worth the schlep to Middle-of-Nowhere, Brooklyn. Leave early, though -- unlike the show, the trains are not amazing.

(Snow White plays at the Bond Street Theatre in Brooklyn, 303 Bond Street between Union and Sackett, through January 15th. Performances are Fridays at 7PM, Saturdays at 3PM and 7PM, and Sundays at 3PM. Tickets are $35 for adults and $30 for seniors and children 17 and under, and are available at www.BrownPaperTickets.com or by calling 1-800-838-3006. For more invormation visit www.Company XIV.com.)