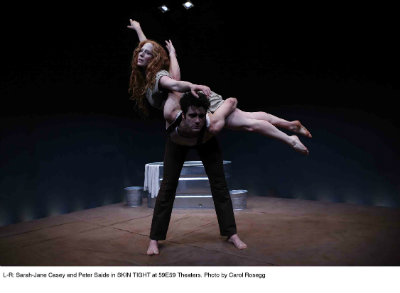 BOTTOM LINE: The powerful choreography and performances enable the production to create a powerful, emotionally-charged portrait of a marriage.

The lyrics “love is a battlefield,” take on a new meaning when applied to the one-act play Skin Tight, which opens with a couple in the throes of what appears to be a violent wrestling match. As the two pin each other down and slam each other to the floor, their actions turn sexual with the punches turning into kisses. The play, centered on a married couple living on a farm in New Zealand in the mid-twentieth century, is based upon the poem “The Magpies” by Denis Glover, a classic work of literature in New Zealand. The poem opens with the line: “When Tom and Elizabeth took the farm/The bracken made their bed/And quardle oodle ardle wardle doodle/The magpies said."

As the play goes on, the two break from their violent fights to pause and perform everyday tasks with a violent edge. The wife, Elizabeth (Sarah-Jane Casey), shaves her husband Tom's (Peter Saide) face with the sharp edge of knife, placing the blade across his throat from time to time. Tom takes the knife and slices the skin off an apple, informing his wife that his love for apples comes from the sensation of slicing off skin. Soon, the violent fights come to mirror the verbal repartee between the two, with Elizabeth stabbing Tom in the stomach as she confesses her infidelity while Tom was away at war. “Did you know I had a lover?” she asks as she thrusts the knife in twice. Her literal stabbing becomes metaphorical to the emotional blow she inflicts upon him. The powerful dynamic that pushes the boundary between violent and erotic becomes the main focus of the play, as the two move in impressively synchronized movements which are well choreographed by Natalie Lomonte. Director Nick Flint chooses the physical drama of the couple as the focus of the work, with it featuring many prolonged, tense, wordless bouts between the two. Eventually, between bouts, the two discuss the many sad fragments of their married life which include an estranged daughter in London.

Actress Sarah-Jane Casey shines in her performance, able to convey dominance and violence one second and vulnerability and fear the next. Her final, tragic moments are delivered with convincing and nuanced sorrow. Perhaps giving focus to the poem beneath the play, either in the accompanying program or elsewhere, would make the work’s final moments stronger, as the sound of the magpie bird’s final sad cry in the play mirrors the poem’s observation that even when life and marriage end, the sound of the birds still goes on. Skin Tight might be a short work, but its emotional effect is a powerful one that lingers long after the actors have left the stage.