Shatner's World: We Just Live in it 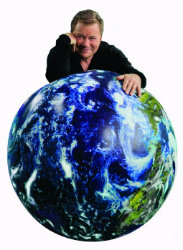 BOTTOM LINE: William Shatner creates an engaging one man show by sharing humorous and touching anecdotes from his 80 years of life.

After watching Shatner’s latest one man show, Shatner’s World, which focuses on both his personal life and his life as an actor, I found myself amazed not by how much Shatner had done within his career, but rather how little. Despite possessing a charismatic personality, a strong stage presence, and being a well known name, Shatner’s recollections reveal his career highlights to be a three-year stint (according to Shatner) as Captain Kirk on Star Trek, portraying Danny Crane on Boston Legal, understudying for Christopher Plummer in Henry V, and a few various stints in film and theater. One can’t help but hope for a new acting opportunity for the obviously gifted performer.

The show opens with a nod to Shatner’s Star Trek days: a large planet shaped video screen shows a Star Trek-like spin through the galaxy while a transporter beam shines on stage. However, die-hard Star Trek fans should be forewarned: his years on the show are only a small part of this autobiography. Shatner opens with a few recent video clips, at a Comedy Central roast getting roasted by George Takei, doing stand-up to introduce George Lucas, and displaying his most recent on-camera forays (although footage from his Priceline commercial is never shown.)

Shatner then jumps backward to his youth in Montreal, detailing his half-hearted studies at McGill University, his decision to defy his father’s wishes and become an actor, and sharing such anecdotes as hitchhiking across America. The anecdotes are not always linear and are not always thematically related to each other, but the moments from life that Shatner chooses to share with the audience are both touching and sometimes quite humorous.

With only an office chair as a prop (two other chairs sit at either sides of the stage, but seem to have no other purpose than taking up space), Shatner is able to recreate various moments from his life, turning the chair sometimes into a horse or the inside of a rocket. Shatner’s ceaseless energy and agility make him seem far younger than his 80 years, proving his natural gift for performing.

One of the show’s most endearing stories takes place when Shatner is divorced and broke but finds renewed faith through a little boy that knocks on his trailer door and asks to see “Captain Kirk’s space ship.” Later, Shatner tackles such heavy themes as love, loss, and death. Shatner briefly mentions the sorrow he suffered when his wife drowned and that he still managed to find love yet again. “Love is the difference between the cold light of the universe and the warmth of the human spirit,” he says, slipping into a more somber tone. He lightens the mood by connecting his ruminations on love to a story about a time when a female primate attempted to seduce him. Soon after, Shatner explores death, showing footage of him playing a dying Captain Kirk in a Star Trek movie. “Death is the final frontier,” he says.

Shatner chooses to end his show with an exploration of his foray into music, describing the album he released in the 1960s (leading to an awkward performance on Johnny Carson) and then his album “Has Been” which he worked on with Ben Folds. Shatner performs a selection from the album “Real” ending with the sentiment, “Sorry to disappoint you/But I'm real." Although the anecdotes seem sometimes random and oddly paired together, they nonetheless paint an engaging picture of the ups and downs of a life (sometimes) lived in the public eye.