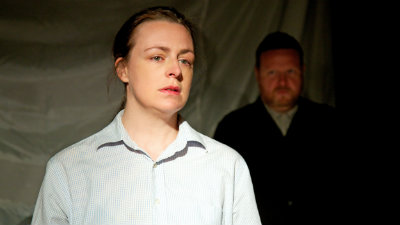 BOTTOM LINE: An exceptional cast brings medieval France to life in this classic of modern theatre, directed in an experimental production that sometimes misses, but never by much.

In case you didn’t know, George Bernard Shaw is among the greatest playwrights of the English language. There can be no serious dispute about this. In fact, he’s easily in the running for greatest of all time (with the possible exception of Shakespeare). Luckily for him, he managed to achieve greatness while also turning out dozens of extremely entertaining plays. From Mrs. Warren’s Profession to Arms and the Man to Pygmalion (on which My Fair Lady, which he hated, was based), Shaw’s work is always being performed somewhere. For casual theatergoers, it succeeds because of his unforgettable characters and razor-sharp wit, while for those of a more intellectual bent, the author’s unrelenting critique of the social, political, and religious institutions which define Western culture is among the most insightful produced by any writer in any form. The plays don’t exactly direct themselves, but they come close; a director’s first responsibility with this work is to communicate the playwright’s very clear vision, not his or her own.

Shaw’s genius is magnified by the fact that he lived a very long and productive life during a time of enormous cultural change; when he died in 1950 at the age of ninety-four, he had written over sixty plays, won an Oscar, and been awarded the Nobel Prize for Literature. His most beloved works are generally those that depict the foibles and hypocrisies of middle-class Englishmen struggling to come to terms with changing times. But with Saint Joan, first performed in 1924 (just a few years after the famous Maid of Orleans was canonized), he stepped out of his comfort zone, to brilliant effect. It tells the “amazing, but true” story of how a seemingly ordinary teenage girl from rural France managed to win several military victories against the occupying English army, and turn the tide of the Hundred Years War, before being excommunicated from the Catholic church for heresy and burned at the stake. (Obviously, the church later changed its mind about the heresy.) The Bedlam theatre company has taken on this sprawling epic, whose cast of characters includes two dozen speaking roles, and does so in a fashion that was no doubt born both of necessity and of inspiration: four actors perform the three-hour-long text in a space denied all but the barest elements of theatricality.

Initially mounted back in March, Bedlam’s Saint Joan has been brought back for a three-week encore at the Access Theater in Tribeca. Director Eric Tucker does double duty as a member of the superlative cast. Andrus Nichols plays Joan, while Tucker, Tom O’Keefe, and Ted Lewis play all other roles -- noblemen, clergymen, soldiers. Not only do the actors play multiple characters within each scene, they sometimes even swap characters mid-action. In a play with so much plot, this choice is risky (to say the least), but if any group of actors can handle it, this is it. Costuming helps, but only so much, as the cast is clad in modern garb with very few medieval touches. What really distinguishes a king from an archbishop and a wild youth from a cynical middled-aged man on this stage is the precision of the performances and the clarity of Tucker’s direction.

The excellence of the ensemble’s work almost makes up for the element of the production I least enjoyed: the environmental staging. The action of Saint Joan ranges from chateaux to army camps to cathedrals to prisons, and in this production, the audience is likewise moved to and fro, from the theatre proper to the lobby and back again, sometimes being required to stand or to sit on the floor. The practical issues with this approach are obvious (the show is interrupted numerous times, the spectator may not care to subject herself to possible discomfort), and I’m not fully convinced that the supposed intimacy this creates with the audience is worth all the fuss, particularly in a space as small as the Access Theater. However, if the goal was to make me feel like I was working for my entertainment, Tucker did partially succeed, and the starkness of the playing space -- some metal chairs, naked light bulbs, candles and sheets are virtually all that exists in terms of a set -- powerfully underscores the despair that Joan will ultimately experience, long before she herself can see it coming.

Despite our difference of opinion on the merits of this kind of experimentation, Bedlam and I clearly agree on one important question -- the sublimity of Shaw’s words and the enduring importance of his ideas. Joan of Arc is in many ways the ideal subject for the playwright’s work; as an atheist, he certainly would not have shared her spiritual beliefs, but, as he depicts her, she is the quintessential modern woman, a unique individual who had the bad luck to live in a time in which uniqueness and individualism were not tolerated, particularly not in illiterate farm girls. Andrus Nichols’ performance is tremendous, illuminating every stage of Joan’s journey from country lass to soldier to hero to scapegoat, and finally to saint.

Bedlam’s Saint Joan is so impressive in the areas that truly matter that, whatever reservations one has about some of its more innovative elements, it deserves to be seen by as many people as they can cram into that tiny lobby. Despite being an 88-year-old play based on 15th-century events, there’s nothing dated about it; the more things change, the more they stay the same. As long as nations go to war, churches crave earthly power, and “special interests” pour money into the political process, Shaw and Saint Joan have a message for us…and God help us if we fail to heed it.

(Saint Joan plays at Access Theater, 380 Broadway at White Street, through May 13, 2012. Performances are Tuesday through Saturday at 7pm and Sunday at 3pm. Tickets are $30 and are available at theatreBEDLAM.org or by calling 866-811-4111.)