Limited number of half-price tickets ($27.50) available for every performance (10 or fewer) 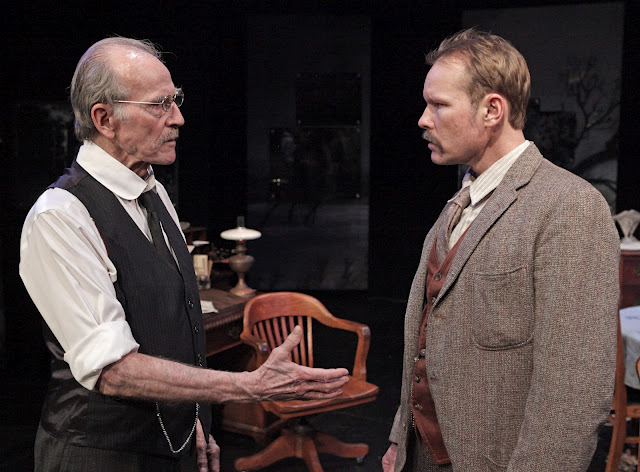 BOTTOM LINE: An infrequently revived masterpiece from 1912, ably performed by an outstanding cast.

In 1912, Rutherford & Son, by then-unknown Githa Sowerby, opened to rave reviews at London’s Royal Court Theatre. Initially scheduled for just four performances, the reaction to the play was so positive that it was moved to the West End and then across the Atlantic, opening on Broadway several months later to equally enthusiastic acclaim.

Sowerby was a talented writer of children’s books at the time but Rutherford & Son was her first play and for a first time playwright -- and a woman to boot in 1912! -- to achieve such success in her first playwriting experience was truly remarkable. Emma Goldman, the early feminist, described Sowerby as history’s first significant female playwright and The London Times foresaw a future “full of promise” for her.

And yet it was not to be. Sowerby did go on to write other plays but none were nearly as successful as Rutherford & Son and by 1980 the play, and Sowerby herself, had largely disappeared from view. In 1980, however, an abridged version of the play was produced by a women’s group in London and since then, the play has occasionally been revived by amateur and professional troupes both in the US and England (most notably by the Royal National Theater in London in 1994, the Mint Theater in NY in 2001, the Shaw Festival Theater in Niagara-on-the-Lake in 2004, and the Northern Stage in Newcastle-upon-Tyne in 2009).  And in 1999, the National Theatre in London proclaimed Rutherford & Son to be one of the “One Hundred Plays of the Century.

The Mint Theater Company, which has been incredibly successful in its self-proclaimed mission to produce “worthwhile plays from the past that have been lost or forgotten,” unearthed and first produced Rutherford & Son in 2001. Unfortunately, performances for that production began just days before the attack on the World Trade Center and, as a consequence, despite the fact that the play was well-received by the critics, it failed to get the attention it deserved. Which explains why the Mint Theater Company made the decision to revive Rutherford & Son on this centenary year anniversary of its London premiere.

We can be very glad that they did. Rutherford & Son is a terrific play, addressing timeless themes that are as pertinent today as they were in 2001 -- or in 1912 -- including the divisions which exist between generations, between the sexes, between social and economic classes, and between geographical regions as well as issues of honor, loyalty and family conflict.

John Rutherford (Robert Hogan, who appeared in the same role in the 2001 production), is a single-minded, cold, domineering widower, who owns and runs Rutherford’s, the family glassworks, a major business in the industrial north of England that was founded by his father but that has now fallen on hard times. He shares his home with his spinster sister Ann (Sandra Shipley); with his 36 year old unmarried daughter Janet (Sara Surrey); with his younger son Richard (James Patrick Nelson) who has become a parson; with his older son, John Jr. (Eli James); with John Jr.’s wife Mary (Allison McLemore); and with John Jr. and Mary’s baby son, Tony. Rutherford runs his home with an iron grip, particularly where the women are concerned; they would seem to be there for no other purpose than to see to it that everything runs smoothly, that meals are served on time, that Rutherford’s boots are removed promptly when he returns from work, etc.

Rutherford runs his business much as he runs his home. His glassworks manager, Martin (David Van Pelt, who also reprises the role he played in the 2001 production) is dealt with in the same manner as is his family: he simply is expected to do his job, which is to do whatever is in the best interests of the Rutherford company as Rutherford sees it, no questions asked. It is not that Rutherford is a cruel or mean-spirited man per se; he is not. Rather, it is that he is totally insensitive to others’ feelings.

Unbeknownst to Rutherford, Janet is in the midst of an affair, which she sees as a possible escape route from her father’s tyranny. Richard, too, by becoming a pastor, already has partially escaped the family’s clutches; while he may be ineffectual, it has at least gotten him out of the family business and he is even considering moving out and accepting a position as pastor in another town. John Jr. also has hopes of escaping from his father: by marrying Mary who was nothing more than a London shop girl, he has disappointed his father who had hoped that his son would marry up in class, rather than down. But John Jr., working in secret, has developed a process that could reduce the cost of glassmaking by a third. If it turns out to be effective on a large scale, it could prove to be the salvation of the Rutherford company -- and of John Jr. himself, who is looking forward to bringing his process to his father’s attention -- not to give it to him outright but to share it with him if he “gets his price.” And if he does not, there are other glassworks, larger than Rutherford, to whom he might sell it. But, as you might imagine, the elder John is not on his son’s wavelength.

The play’s only other character is Mrs. Henderson (Dale Soules, who also reprises the role she played in the 2001 production). It is she who comes to plead with Rutherford to re-hire her son, who he fired for having stolen money from the factory.

The three actors who are reprising the roles that they played in the 2001 production (Hogan, Van Pelt and Soules) are all wonderful in their portrayals of Rutherford, Martin and Mrs. Henderson, respectively.  Of the newcomers to the show, Surrey is a standout as Janet.

(Rutherford & Son plays through April 8th, 2012 at The Mint Theater, 311 West 43rd Street, between Eighth and Ninth Avenues, Third Floor. Performances are Tuesdays through Thursdays at 7PM; Fridays and Saturdays at 8PM; Saturdays and Sundays at 2PM. No performance Tuesday, February 28th. Tickets are $55 ($45 through March 4th) and can be purchased at minttheater.org or by calling 866.811.4111.)