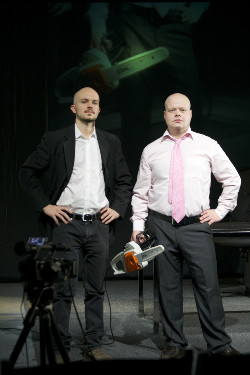 BOTTOM LINE: A humorous, if not particularly insightful, look at the greed of one Wall Street insider.

Capitalism has certainly come in for a well-deserved drubbing of late and Michael Yates Crowley’s Righteous Money craftily demonstrates all that is wrong with worship of the Almighty Buck.

The story centers on CJ (playwright Crowley plays the part in the English version; a fierce, bombastic Matthias Hesse enacts the role in the German version Gerechtes Geld). CJ is a former hedge fund manager whose wings have been clipped by the SEC. A master of reinvention, CJ now hosts Righteous Money, a TV talk show seen nationwide on CNBC. The program’s ostensible aim — helping the average Jane and Joe make a quick bundle — is, in reality, a foil to sell CJ’s latest treatise, a book called Buy the Recession.  And — no spoiler here — CJ is a helluva salesman, a charismatic, fast-talking, wheeler-dealer of the highest order.

At least for a while.

When it becomes flagrantly apparent that his assistant, Nathan (Patrick Dollas), is not going to show up for that day’s filming, CJ begins to unravel and we ultimately learn that the Big Man has bedded said assistant and made pillow-talk promises that he has no intention of keeping. The audience never sees Nathan in the English-language version of the play; instead, his presence is telegraphed via telephone calls that periodically interrupt the program. In the German rendition [Note: Super titles are projected onto a screen behind the actors to translate the German into English] Nathan is visible, but does not speak until the denouement.

In both scripts, CJ slowly but surely falls apart as he begins to imagine Nathan sitting at home, vindictively plotting ways ruin him financially — and it ain’t pretty to behold. Suffice it to say that Gerechtes Geld features a chainsaw and lots of blood while Righteous Money is less overtly violent, but no less paranoid.

It’s absurd, which is the point, and ribald humor is ample throughout, from raunchy sexual innuendo to double-talk, from misanthropic quips to simplistic financial advice offered in a patter that mimics real-life television.

Unfortunately, there’s no subtlety. Audience members needing a heavy-handed reminder that a pocketful of greenbacks is no guarantor of happiness will love Righteous Money/Gerechtes Geld but those who walked into the theater already knowing this will likely be less impressed. That said, the staging — and watching two slightly different version of the play back-to-back — offers a fascinating look at revision, adaptation, translation, and interpretation. What’s missing is character development and neither production offers any insight into CJ’s personality. Why he wants (or maybe needs) to be a gazillionaire remains a mystery and it’s hard to feel sympathetic towards this one-dimensional man even as he disintegrates before your eyes. In addition, the German performance is somewhat confusing. The silent second character plays both the show’s producer, Sandra, and the aforementioned Nathan and if there was a point being made about gender politics it went by me.

Still, there’s much to recommend in Righteous Money/Gerechtes Geld. Although the dramedy opened in Berlin, Dublin, and Edinburgh in 2010, both variations continue to evolve and Crowley is to be credited for incorporating Occupy Wall Street protests into the play’s US debut. Timely, humorous, and politically sharp, it may preach to the choir but thankfully, it’s an entertaining song.

(Righteous Money plays The Red Room, 85 East 4th Street, through January 21st. Performances are January 13th, 14th, 20th and 21st, all at 8PM. Tickets are $15 for adults, $10 for students and can be ordered through ovationtix.com. For more show info visit righteousmoney.tv.)