$65 (A limited number of tickets for performances Sundays at 7PM are sold for $20, and student tickets are $25.) 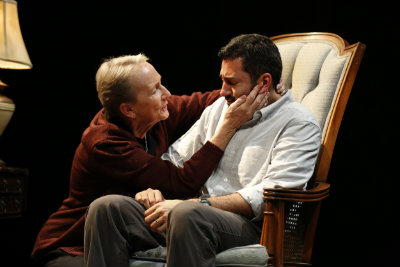 BOTTOM LINE: A compelling and welcomed punch to the gut.

Intense doesn't seem like a strong enough word to define the most dramatic moment in Red Dog Howls. Though it isn't out of the blue, and it's acted and directed with care, the details themselves in Alexander Dinelaris's script build with such inevitable agony that the audience can't help but collectively exhale once the scene ends.

Though Red Dog Howls is sometimes hard to watch, Dinelaris never panders or manipulates. It's harsh because the story is harsh. Because living through genocide is harsh. And it's a complete joy to watch -- in a masochistic kid of way.

The incomparable Kathleen Chalfant plays Rose, a 91-year old grandma, tough as nails and rather unempathetic, even to her grandson Michael (Alfredo Narciso). A secret most of Michael's life, he meets Rose for the first time after his father dies and leaves him a cryptic message compelling Michael to follow the return address on an envelope. Behind the door is a grandma and a family history he never knew. But Rose knows exactly who Michael is.

Rose's past is a complicated one -- born in Armenia, she fled to the states with Michael's father when he was a toddler. Able to escape during the Armenian Genocide, Rose has a hard time discussing the events surrounding her exodus. As the play unfolds, Michael begins to understand what her life has been like, and we do too. At the same time, Michael's wife Gabriella (Florencia Lozano) is pregnant with their first child. Things at home begin to break down when Michael's attention turns from his wife to Rose. And when medical complications occur and Gabriella and the unborn baby are in danger, Michael has to find the strength to be there for everyone.

Michael narrates the story, shifting in and out of scenes to either show or tell. As he describes his father's attention to words, how he carefully chose them through his life, it becomes clear that this is a tenet of Dinelaris's script, as well. The care with which these characters speak and the specificity of their word choices provides us with a very specific understanding of who they are. Through the course of their conversations, Michael repeatedly tells Rose that he doesn't understand and at one poignant moment she responds, "You will understand." These three words are enough to hold the weight of this exchange and their succinctness says more than a poetic paragraph ever could. For a woman who has kept mum her entire life, how things are said is as important as what is being said. Director Ken Rus Schmoll works with this conceit magnificently: the text is never invisible but never overbearing.

Chalfant is magnetic as the mysterious matriarch, completely lovable despite her coldness. You can see Chalfant's concentration, but it never looks like work as she seamlessly becomes this complex woman. Narciso and Lozano are well-cast as the savvy couple who has it all together until life gets drastically unstable. All three successfully portray confidence through wit that becomes something much less funny.

Red Dog Howls is a tight production with a clear objective. The fact that it is highly disconcerting only speaks to the skill with which the story is presented, both by the cast and the artistic team. Though there is nothing fun about seeing Red Dog Howls, it is a worthwhile experience regardless. If you prefer your theatre as light as can be, Red Dog Howls might prove to be too much, but anyone seeking a stimulating play should run on down to New York Theatre Workshop.

(Red Dog Howls plays at New York Theatre Workshop, 79 East 4th Street, through October 14, 2012. Performances are Tuesdays and Wednesdays at 7PM; Thursdays and Fridays at 8PM; Saturdays at 3PM and 8PM; and Sundays at 2PM and 7PM. Tickets are $65. A dedicated number of tickets for performances on Sundays at 7PM are sold at $20. Student tickets are available for $25 with valid ID. To purchase discount tickets visit the box office, and to purchase full-priced tickets visit ticketcentral.com or call 212-279-4200. For more show info visit nytw.org.)