This show is sold out, but more info available at www.nymf.org. 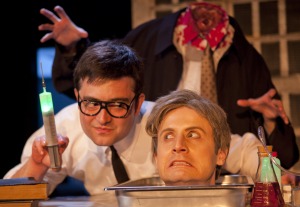 BOTTOM LINE: A campy musicalization of the film Re-Animator spewing gore and guffaws in equal measure.

Coming off a 2011 West Coast run, Re-Animator the Musical reprises on the Western edge of Manhattan to join the 2012 New York Musical Theatre Festival line-up. This work is lovingly adapted from the 1985 film “Re-Animator,” based on the story by H.P. Lovecraft. Stuart Gordon, who directed the movie, returns for the musical as director, producer, and co-book writer, teaming with Re-Animator screenplay collaborators Dennis Paoli and William J. Norris and with composer and lyricist Mark Nutter (The Bicycle Men, 3rd Rock from the Sun).

Re-Animator takes place at a teaching hospital where one of the students, Herbert West (Skipper), is researching a mysterious and gory new serum — one that will re-animate corpses! (The fresher, the better!) But will the experiment jeopardize all who encounter it, including lovebirds Megan Halsey (Avery) and Dan Cain (McKenna)? Meanwhile, will West’s distrust of Dr. Hill (Merlin) prove justified? Who will survive this science nightmare, and if the dead can be reanimated, does it matter?

Re-Animator brings camp, gore, and more to the PTC Performing Arts Space, which gains a splash section for the performances. But never fear, all who sit in the splash seats get a free poncho to keep the blood off! The show is as heavily imbrued with exposition as with cruor, and it’s arguable if this piece isn’t better as a movie than a musical, but the comedy is constant and once the crowds warmed up, they seem open to what Re-Animator threw at them (especially the sprays of splatter). The production uses sound and light to fully create mood and atmosphere in the space from the first moment the audience enters the house, then the show is peppered from beginning to end with quip and catchy tunes.

Lovers of the movie will find much to enjoy in this nostalgic musicalization. The film fans seem specifically receptive to the gags and gore, while those without insider knowledge may find less to appreciate.