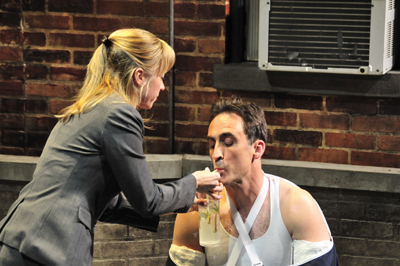 Travis McHale’s set, the Brooklyn apartment building rooftop upon which Holly Webber’s new play Pratfalls unfolds, is perfect. McHale thought of everything: the tar-and-shingle floor, the electrical boxes, the brick wall and lace-curtained windows of the taller building next door, the tar-streaked white bucket that never leaves, even the bird poop splattered in just the right spot. Even more, this set has an immediate appeal to pretty much anyone who lives (or has lived) in New York. New York rooftops are intimate, surprisingly quiet, and always offer a spectacular view. I, for one, regularly take to my roof on a nice late afternoon to have a beer and lay in the sun with a friend. Rooftops are those unique urban spaces that New Yorkers prize in the way that people who live elsewhere prize their yards.

Indeed, Pratfalls is the kind of play that tells a story that can only happen in New York. Roy, a comedian (played by Victor Verhaeghe, who has a recurring role on HBO’s Boardwalk Empire), has had a one-night stand with Elena (played by the Rebecca De Mornay-esque Kate Middleton), a guarded professional lawyer who “used to be married.” The plot begins when Roy brings Elena up to his rooftop, the place where he spends pretty much all of his time. Elena, who is trying to find a nice way to get the hell out of there, stays out of politeness when Roy’s quirky older neighbor Frances (Amelia White) shows up. Elena’s intentions of never seeing Roy again are destroyed when Roy has an accident trying out a new ending to his comedy routine. She feels partially responsible and offers to help take care of him.

From there, the plot consists of getting-to-know-you conversations, misunderstandings, arguments, and make-ups, all of which take place on the roof. The plot is driven primarily by Roy’s romantic interest in Elena, which she meets with a cautious and wavering reciprocation, and which is colored by the circumstances of which her prior marriage ended.

Pratfalls fits safely into one of the most common categories of off Broadway theater: the “only in New York heterosexual romantic comedy.”  As an open-minded theatergoer, I really have no qualms with seeing shows that aren’t trying to be groundbreaking (in fact, attempts at groundbreaking theater are often a million times more unbearable than “safe” theater). However, I also want those safe shows to have something special to offer that sets them apart from all of the other shows like them.

Unfortunately for Praftalls, the only thing that made it stand out was the one thing that I got to see before the show even started -- the set. Otherwise, Pratfalls offers about what a run-of-the-mill TV sitcom has to offer: humor, quirky characters you wouldn’t want to know in real life, physical comedy and an actor you may recognize in the leading role. But it is also about as memorable as a sitcom, without another episode to follow to keep it fresh in your mind.

Perhaps the biggest downfall, though, was that I found myself rooting against the romance between Roy and Elena. Though there is something to the “opposites attract” vibe between them, I think that Elena could do better. Roy has a soft side, but he’s also prone to anger and aggression. Roy spends all his time sitting around on the roof and when people do come around, he has to be the center of attention. Perhaps if he left the roof more, he’d be a more appealing person. Perhaps the set is the problem after all.

(Pratfalls plays at the Dorothy Strelsin Theatre at the Abingdon Theatre Complex, 312 West 36th Street, 2nd floor, through May 19, 2012. Performances are Wednesdays through Fridays at 8PM, Saturdays at 2PM and 8PM, and Sundays at 2PM. Tickets are $25, or $20 for students and seniors, and can be purchased by visiting ovationtix.com or by calling 866.411.8111. For more information visit groundupproductions.org.)