By David Auburn; Directed by Wendy Merritt
Produced by Sink or Swim Rep

Off Off Broadway, Play Revival
Runs through 7.28.10
The Connelly Theater, 220 East 4th Street 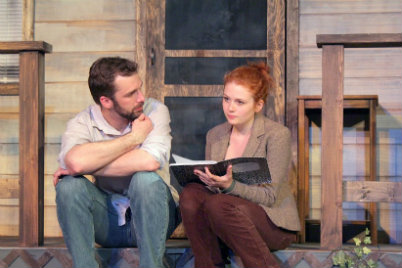 Reviving a well known contemporary play that has already received numerous accolades can be a challenge for a small theater company, as it means finding renewed interest in a work that theatergoers are most likely still familiar with, comparing any new rehashing in their minds to the original, larger-budget production. Such is the case with Sink or Swim Rep’s production of David Auburn’s Proof. The play enjoyed a lengthy stay on Broadway, won a Pulitzer Prize for drama in 2001, and was even turned in a major motion picture.

At the center of the play is Catherine (Kristin Parker), a twenty-five year old woman whose life is thrown off course by her father’s mental instability. Once a well admired professor of calculus, her father’s own mental illness grew greater and greater making him unable to care for himself or clearly discern reality. Having to bear the burden of taking care of him alone, Catherine drops out of college and puts her own life on hold as she watches her father’s brilliance slip further and further under a sea of madness.

The play opens with Catherine having a conversation with her recently deceased father, gulping down the bottle of cheap wine (she believes) he bought her for her birthday. Catherine fears that her vision is a signal that her mind will meet the same fate of her addled father. Her fears are interrupted by the arrival of Hal (Eric Smith), her father’s graduate student, who has taken to coming to the house to root through her father’s numerous notebooks in hopes of finding brilliant new work amongst the gibberish of his sickened mind. The two engage in a sexual tension-laced conversation, with Hal trying to convince her to come see his admittedly terrible band, which quickly turns into an argument when Catherine accuses him of stealing her father’s notebooks.

Stuck at a crossroads in her life, Catherine prefers not to deal with the questions up ahead and loses herself in a daze of sleeping late and reading endless magazines. Her daze is interrupted by her sister Claire (Whitney Kaufman) who arrives to tie up loose ends and attend their father’s funeral. Believing her sister to be slipping into the same mental illness that destroyed their father, she insists that Catherine relocate with her to New York City where she can restart her life under the watchful eyes of psychologists. Catherine leads Hal’s attention to a particular notebook of her father’s, where amongst the gibberish lies a proof of potentially great brilliance. Catherine insists that this work of potential greatness was not in fact the work of her late father, but in fact is her own creation. Claire is doubtful and Hal refuses to believe her until it has been evaluated by a team of his peers at the University. Here the title Proof goes beyond the mathematical sense of course, since the validity of the proof proves both Catherine’s sanity as well as her talent as a mathematician.

Some more mathematically astute critics have questioned the believability of Auburn’s creation of a proof that could bind all branches of mathematics together. However, a suspension of disbelief is needed to fully appreciate the intricacy and nuance of the work, and Catherine’s fear of both her own genius and madness can serve as an allegory for the fact that madness and self destruction are so often intertwined with glimpses of brilliance, regardless of what realm of ability the brilliance lies in.

Much of this production’s success can be credited to both the set and strong performances from an obviously gifted cast. The production utilizes a convincingly realistic stage (designed by Christopher Thompson) which differs from other interpretations that often use minimalist stages. Kristin Parker fully embodies the character of Catherine, able to convey the vulnerability and fear that her character masks with sarcasm and defensiveness. Parker and Smith also convey convincing chemistry as Hal and Claire, imbuing their dialogue with sexual tension. Overall, this well-orchestrated production breathes fresh life into this deservingly lauded script.