Written and directed by Yoshvani Medina
Produced by Repertorio Español 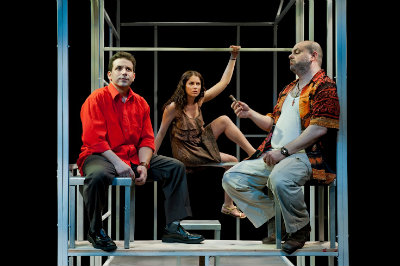 The use of foreign language in a play presents many obstacles that the medium of film doesn’t have to face, as the use of captioning in theater can be a difficult option to utilize. Repertorio Español, a theater that features works entirely in Spanish, has found an innovative way to assist their audiences who aren't fluent in Spanish by utilizing a new caption system in which each seat has its own screen of simultaneous translations in English. The system isn’t perfect, but being able to hear a play in its intended language adds an appealing authenticity to Probation, a play centered around the plight of an ambitious Cuban immigrant.

The play opens with two men, Fredo (Sandor Juan) and Pancho (Alfonso Rey), fighting on a Cuban battlefield. Fredo dies while aiding Pancho and Pancho promises to help his son one day as repayment. The play then fast forwards in time to show us Fredo’s son Freddy (also played by Sandor Juan), now in his early thirties, on a boat from Cuba to Miami, Florida. His pregnant girlfriend Yenny (Hannia Guillén) holds her stomach and head in agony as she suffers from both sea sickness and morning sickness.

Once at shore, Freddy decides to bypass customs and have Pancho pick them up, showing his naiveté. Pancho immediately shows Freddy generosity, buying him a car and allowing him to live with him for an undetermined length of time. Yenny and Freddy find their dreams of immediate success in America stifled by reality as Freddy breaks his back loading luggage at the airport and Yenny tries to find work as a TV writer, only to find that getting anywhere in the industry means capitalizing on her body and sleeping her way to the top. After spending every night in agonizing pain and exhaustion, Freddy agrees to take a job arranged by Pancho that he initially turned down: running a clinic that makes its money from Medicaid scams. Freddy is fearful and skeptical at first, but is soon seduced by finally being able to afford a real home and a Mercedes for his wife and new bornson.

The story is broken up by a series of monologues in which each character reveals their inner thoughts and desires to the audience. Pancho and Freddy both speak to the deceased Fredo, and Yenny discusses her dissatisfaction with immigrant life in Miami, sometimes framed as posts to her blog. Her rants against American culture and life as an immigrant are among the most evocative and well written in the script.

Eventually, as predicted, Freddy slips into trouble as the Feds catch on to the scam and drag him in for questioning. The final outcome of the play is one that the audience decides, voting with their applause what choice the troubled characters should make. Adding this twist adds a deeper level of audience engagement. The ultimate drama and outcome of the play, however, is one that is not entirely clear through its many twists, turns, and changes of heart.

Pulsing beneath the basic structure of the plot are unresolved issues surrounding sexuality, which leads to the creation of some of the most compelling lines. Pancho frequently looks at Yenny’s body with a mix of arousal and hatred, calling her a whore. In one scene Yenny tells the audience that she was naively brought to a party with other young women, all of whom were meant to sexually service wealthy men. Yenny refuses to participate, holing herself up in a secluded room while she waits for it to be over. While there, she glimpses Pancho biting the breast of a woman, this leads Pancho to repeatedly writing her off as a prostitute while Yenny writes him off as a creep. Later as Pancho and Freddy shout at one another they again and again accuse the other of being a homosexual.

As an English speaker who knows little Spanish, I felt a bit lost during the production. Part of my feelings of confusion toward the work could be credited to the fact that I was reading imperfect English captions rather than listening to the actual dialogue. (My fluent-in-Spanish companion however, said that she was confused by some of the play’s turns as well.) The timing of the captions would sometimes be off so that the audience would be laughing at jokes I had not yet received a caption for. My screen also froze during the final minutes of the play so that I had to lean over and watch my neighbor’s screen. Nonetheless, entering a theater where everyone is speaking Spanish and hearing a play entirely in a foreign tongue is a fascinating experience that made me feel as though I had travelled to another country without even leaving Manhattan. Telling the story of Cuban immigrants with English dialogue would not have had the same power as hearing them speak in Spanish.

Probation is an enjoyable production overal despite its minor flaws, a fact that can be credited to three factors: excellent acting from a talented cast, an unusual set design, and authentic sound design that serves to fill in the holes left by the minimalist set. Hannia Guillénin in particular shines in the production, showing a broad acting range encompassing both comedy and drama. Although audiences fluent in Spanish will probably be able to appreciate this production to the fullest extent, it is an enjoyable work for all.

(Probation plays at Repertorio Español﻿, 138 East 27th Street, through September 27, 2012. Performances for the rest of July are Tuesday at 7pm, Thursday at 7pm, Friday at 8pm, and Sunday at 6:30 pm. For the full schedule visit www.repertorio.org/probation. Tickets are $27-$37, and a second ticket can be purchased at a special rate of $5. To purchase tickets visit www.repertorio.org/probatio n or by call 212.225.9999.)