Tickets can be purchased online at theotherjoshcohen.com or by calling 212-352-3101

The Other Josh Cohen 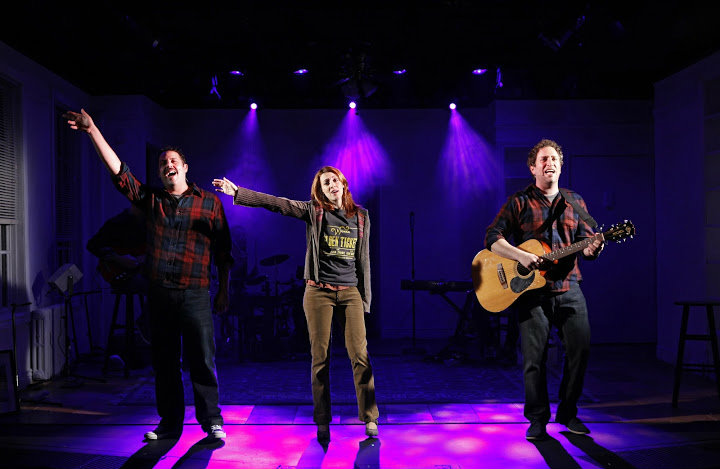 Steve Rosen, Kate Wetherhead, and David Rossmer in THE OTHER JOSH COHEN. Photo by Carol Rosegg.

BOTTOM LINE: A hilarious and self-deprecating new musical that tracks the bizarre turn of events in Josh Cohen’s life after his apartment is robbed.

There are few things a New Yorker dreads more than opening the apartment door to find the inside completely ransacked. Looking at the blank walls, bare surfaces, and empty shelves that used to be stacked with valuables and memorabilia, it's hard not to feel singled out, as though a victim of the universe's practical joke. What could be more frustrating? Well, I suppose you could also be broke and single, with Valentine's Day looming around the corner when all this happens. If this sounds all too familiar, then perhaps you should grab a drink and commiserate with the chronically unlucky Josh Cohen.

We have all found ourselves in a similar position at one time or another. Nothing seems to be going in our favor and we feel as though fate is deliberately working against us. However, no one seems to have it quite as bad as the two leading characters in The Other Josh Cohen, played by Steve Rosen (Past-Josh Cohen) and David Rossmer (Present-Josh Cohen). Present-Josh narrates this true story in the empty, white-walled apartment (designed by Dane Laffrey) that occupies the intimate stage of the Soho Playhouse. He grabs a guitar and begins to sing, and the story of how he was robbed the night he went to a seventies-themed party begins to unfold. Enter a man dressed in gold suit, bedazzled in sequences: it's the Josh of the past, who lives the events of the story for the first time. Throughout the musical, Past-Josh interacts with his future self, and wonders if his situation will ever improve. But it's hard to be positive when it seems like the optimism was stolen off your nightstand, along with your computer. In fact, the only thing not stolen from Josh's apartment was one CD -- Neil Diamond III (and all the good songs are on Neil Diamond II! How could things be worse?)

This new musical is a tremendously enjoyable piece of entertainment. The two Joshes interact with each other through absurd and playful banter that tickles the audience and leaves us clutching our sides in laughter. The rest of the cast is rounded out by the musicians who play alongside the pair of Joshes, and serve the musical by playing multiple characters in Josh's (thus far) disappointing life. Kate Wetherhead gives a standout performance as “A Lot of People” who punctuate the "tragic" events in Josh's story. Whether she is playing his mother, a flirty girl in line at a Duane Reade, his grandfather, his sister, his benefactor, or an Indian 411-Operator, Wetherhead delivers a poised yet silly performance that is always on the brink of being over-the-top, yet never goes too far. Her unique sense of humor and timing only confirms her status as one of Musical Theatre's rising comediennes. She is reason enough to see the show.

Despite her astute comic skills, Wetherhead never upstages the dual Josh Cohens who have a firm grasp on their story, and tell it with simple yet ridiculous showmanship. Much of this is due to Ted Sperling’s invisible finesse as a director. The show could fit comfortably in a college black box, but Sperling polishes the production just enough to be a “legitimate” night of theatre, without denying the musical its delightful scrappiness. The musical (also written and composed by the two "Joshes"), encapsulates a decidedly Jewish brand of self-deprecating humor, and the score is a tongue-in-cheek tribute to Neil Diamond. For those who are not fans of Diamond’s work (I lump myself in this category), fear not, it will have no baring on your enjoyment of the show; but I suspect Diamond fans will appreciate the musical nuances a bit more.

However, the show takes a turn for the optimistic as it nears its conclusion. It appears that all the disappointments Josh has suffered, were all part of the grand design to give him one big pay off: love and companionship. Even if the show ends on a sentimental note, it reminds the viewer that no matter how bad things get, they are only temporary, and life will eventually improve in one way or another. The Other Josh Cohen is a delightful and brief evening of theatre (80 minutes), that will draw out tears of laughter, and leave the audience with very little to kvetch about.

(The Other Josh Cohen plays at the Soho Playhouse, 15 Vandam Street, through November 11, 2012. Performances are Wednesdays, Thursdays and Fridays at 8PM; Saturdays at 3PM and 8PM; and Sundays at 2PM and 5PM. Tickets are $35 through October 30th, and $65 after that; student rush tickets are $25. Tickets can be purchased online at theotherjoshcohen.com or by calling 212-352-3101.)