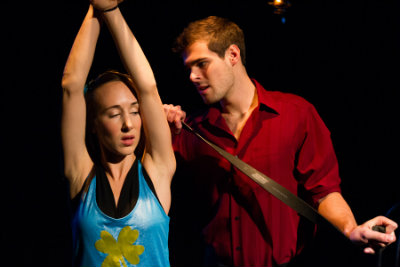 BOTTOM LINE: A strong cast and director help bring to life this story and make it consistently compelling.

Although it is never referenced in the press release or program, the basis for FullStop Collective’s new play Outfoxed is obviously from the infamous Amanda Knox case (the main character’s name is even the strikingly similar Alyssa Maddox). The Knox case is steamy and dramatic enough to be worthy of cinematic reworkings, if not at least made-for-TV movies. In terms of a small theater set the international flavor and dramatic prison settings are somewhat lost, although Fullstop Collective does a good job of trying to create the sense of these settings even with minimalistic sets and props.

The play follows the Knox story rather closely, starting with Alyssa (Lindsey Austen) in prison and jumping backward in time to her first arrival in Italy. Alyssa is intent on finding herself in Italy and her primary motivation seems to be sexual fulfillment. After some brief couplings with other Italian men she attaches herself to Damiano (James Oblak). He is an aggressive man who soon reveals his penchant for rough sadomasochistic sex, tying Alyssa up, taking off her clothing and running a knife across her bare flesh. Alyssa’s carnal awakening is juxtaposed by the reserved nature of the British Melissa (Brandi Bravo), who is more intent on living a traditional student life while in Italy. When Melissa is mysteriously found dead, Alyssa takes the blame and her mother (played with convincing distress by Deanna Henson) must attempt to save her.

While the story itself does not always seem to be well-suited for the small stage of an off off Broadway venue, FullStop Collective does their best to make the most of their minimal set, smartly utilizing lights and sounds. Members of the cast also sit on the side of the stage when not performing themselves, offering audible reactions to the events that unfold. Blinding fluorescent lights and small flashing colored lights also make the transition from a prison cell to a dance floor apparent, thanks to skillfull design by Aaron Porter. The strength of this work lies in its focus on small moments and Alyssa’s interior monologues, two aspects that playwright Lucy Gillespie was wise to focus on. In one scene Alyssa sashays in a miniskirt and fishnets through a club setting while she moans about the joy of “sesso” (Italian for sex) noting that everything seems so much more magical here in Italy than back home in Seattle. She jumps on a man in a night club and the two begin sexually cavorting against a wall while she praises her new found freedom, showing the path that will lead to her downfall.

Although Alyssa is not made out to be an endearing character for much of the play, her thought processes remain compelling. The cast members also manage to make dramatic moments believable, thanks in part to director Brian Hashimoto who favors nuanced emotion over over the top bravado. Austen and Henson manage to make their tense scenes together believable and emotionally charged. Actress Charity Schubert helps make the Italian setting of the play believable by pulling off an accent and a pretentious air. Playwright Gillespie and director Hashimoto succeed in creating a consistently compelling story that never has a dull moment.

(Outfoxed plays at Access Theater, 380 Broadway, through December 16, 2012. Remaining performances are Saturday at 8PM and Sunday at 2PM. Tickets are $15-$18 and are available at outfoxed.brownpapertickets.com.)