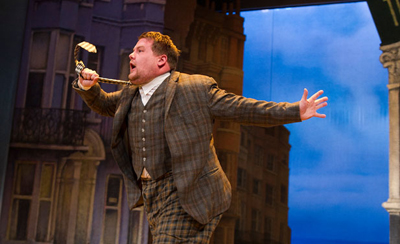 BOTTOM LINE: Perfectly silly and completely delightful -- everything you expect from a first-rate British farce.

One Man Two Guvnors exists to please you. And it’s hard to find fault in so admirable a mission. It might be based on the 18th century Commedia dell’Arte play, Goldoni’s A Servant of Two Masters (and as such pays great homage to its source material), but it’s still a quintessential British farce at heart. And a highly enjoyable one at that.

Gags, pratfalls, and dirty puns abound in One Man Two Guvnors. The spunky cast of 17 is everywhere at once, and Nicholas Hytner’s swift direction keeps the comedy rolling. Led by the brilliant James Corden, the cast maintains a deft awareness of their characterizations, while always keeping an eye on the audience. The fourth wall is constantly broken throughout this play, and the actors’ winks at the audience form a familiarity that makes everyone feel like good friends by the evening’s end.

It’s a deceptively simple plot: bumbling Francis Henshall (Corden), takes two concurrent personal assistant jobs and can’t keep the two straight. As his guvnors are unaware of the other, Francis juggles his responsibilities while trying desperately to make sure the one doesn’t find out about the other. A bit of mistaken identity, and a few intertwined relationship stories later, everyone eventually gets what they want and love prevails. A neat and tidy end, though quite messy in the middle.

A variety show aesthetic permeates the production, including copious musical accompaniment by a four-piece band. Young, handsome, and Beatles-esque (the story takes place in the 1960s) the well-coifed quartet entertains the audience before the show begins, and in between scene changes. The musical element enhances the experience, with much credit owed to these talented musician/performers and their composer, Grant Olding. Bandmates Jacob Colin Cohen, Austin Moorhead, Jason Rabinowitz, and Charlie Rosen, are some of the few non-British cast members on stage, as most of the cast played their roles in London prior to this New York transfer.

One Man Two Guvnors is expectedly silly, with lots of jokes about genitalia and much physical comedy (falling over things, doors slamming people into walls, a general lack of balance leading to frequent face-planting). The humor feels universal; there’s nothing highbrow about this production, yet it’s clear that the talent on stage and behind the scenes is of the highest caliber, familiar yet trustworthy. One Man Two Guvnors is dependably funny. The focus is on the comedy in the moment rather than any substantial takeaway. How lovely to sit back, relax, and laugh for two hours.

(One Man Two Guvnors plays at the Music Box Theatre, 239 West 45th Street. Performances are Tuesdays at 7PM; Wednesdays at 2PM and 8PM; Thursdays and Fridays at 8PM; Saturdays at 2PM and 8PM; and Sundays at 3PM. Tickets are $66.50-$126.50. For tickets and more show info visit onemantwoguvnorsbroadway.com.)