Written & Directed by Cara Scarmack
Produced by The Roadsters

Off Off Broadway, New Play
One Night Engagement: 9.6.12
Dixon Place, 161A Chrystie Street 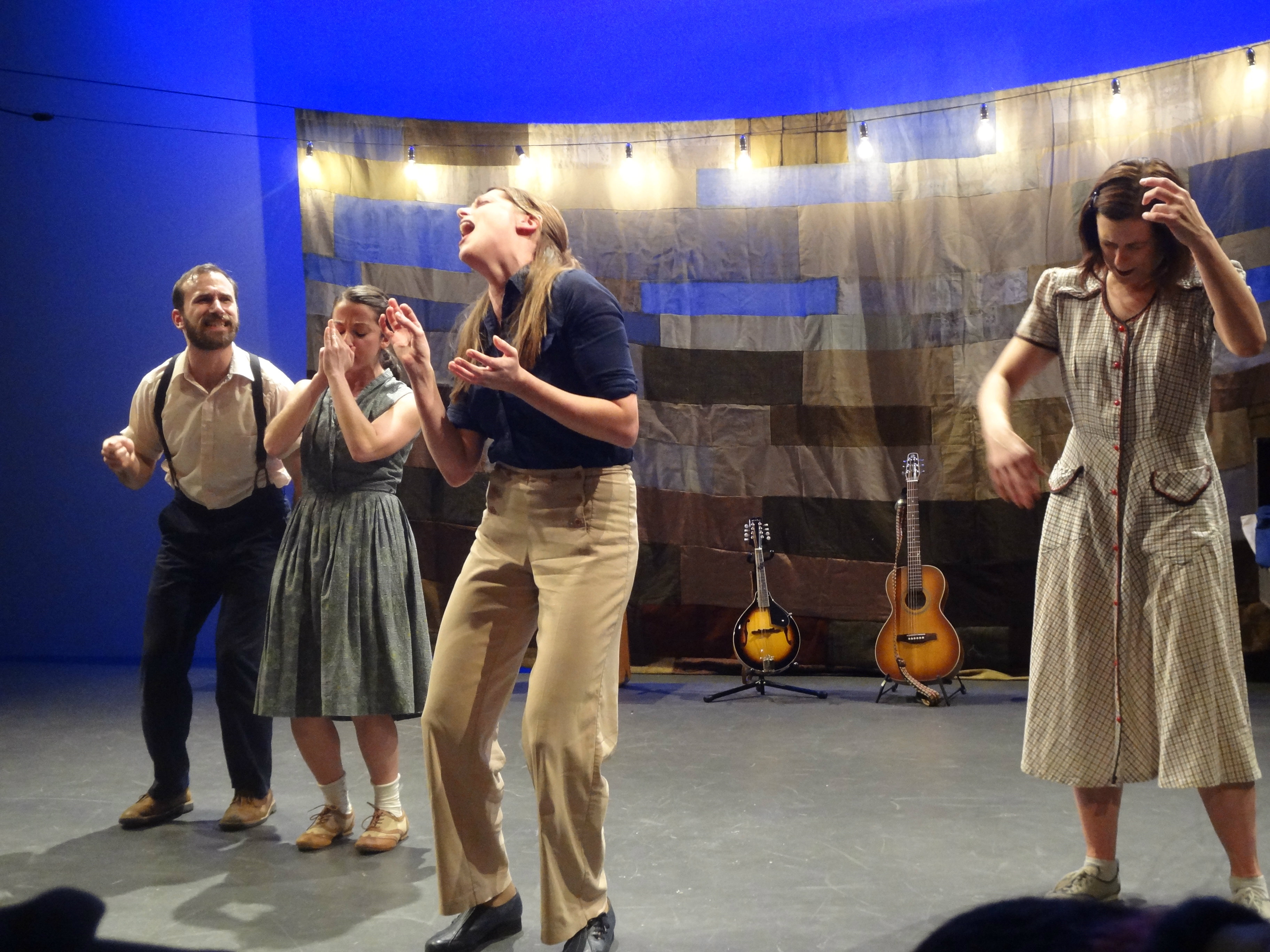 A patchwork quilt illuminated by a string of lights are all that sit on the stage at the start of Ohio, Revisited. Though not much more will occupy the space aside from the four actors and a few pieces of luggage, they manage to create some beguiling stage-magic with their bodies, voices, instruments, and a few scant props. The effect is hypnotic. One may be eager to “figure out” what this play is, but linearity and traditional narrative are not to be expected. Instead we perceive three women (Stephanie Viola, Ashley Nease, and Priscilla Holbrook) and one man (Nathan Richard Wagner), who tell stories of their mundane existence and sing about wanting to “feel alive before they die,” if only life didn’t get “in the way of living.”

The Roadsters are the ensemble responsible for this piece. Their creation (written and directed by their very own Cara Scarmack) historicizes personal experience, and communicates these tales through meticulous and exaggerated physicality, and whimsical imagination. It is due to such painstaking measures that this ensemble is able to create crashing milk trucks with nothing more than a bed sheet and two flashlights, communicate a funeral with an oversized black umbrella, or enact farming with nothing more than precise unified movement. This is a group (much like their backdrop) that has been quilted together, and are so tightly woven that they act as one organism.

Music is equally important when revisiting Ohio with The Roadsters. Not only are there deliberate uses of rhythm and tempo in the movement and dialogue, but in a more literal sense, the ensemble is also a band that plays their own original bluegrass throughout the evening. The music is well played and sung, and is particularly enjoyable in one song where the actor/musicians abandon their real instruments to become the instruments themselves. There is no shortage of creativity in this bunch.

Ohio, Revisited is an American tapestry of simple people, and the events that shape them in an uncomplicated place. But while simplicity has its own brand of beauty, it also wears a shade of melancholy that underscores these less-than-lived-lives. Continuously throughout the play, the actors run up to an imaginary precipice and look over the edge into the void, tempted to leap, but held back by the magnetic pull of something that is not greater than themselves, but has a hold on them nevertheless.

The heightened text, theatrical and inventive staging, and the unity of The Roadsters makes for a truly unique theatrical experience: one where questions are posed, but not necessarily answered; abstract and detached from itself, while constantly inviting the audience to engage; entertaining and perplexing, but always bewitching. What The Roadsters bring to the table is a slice of apple pie avant garde.