Use code TRPOST for 20% off

Music and lyrics by Cole Porter; Adapted and with a new libretto by Rob Urbinati
Based on a novel by James Laver and an original libretto by Romney Brent
Directed and Choreographed by Will Pomerantz
Produced by the Prospect Theater Company 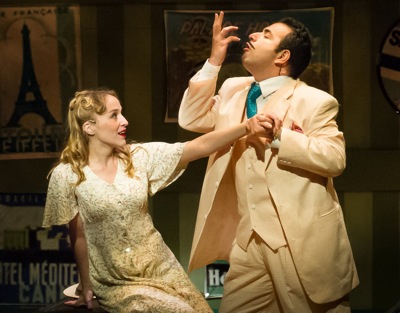 BOTTOM LINE: An entertaining, if quaint, look at one woman’s quest for independence and liberation, taking place in the 1930s.

When Evangeline Edwards (Jennifer Blood), called Eve by her friends, completes her studies at a Swiss Finishing School, she tells her chums that she plans to return to her aunt’s home in Oxford. Once settled, she reports that she’ll marry her childhood sweetheart, Oliver (Andrew Brewer), and become a respectable middle-class lady.

Her friends, four women of varying temperaments and national origins, are shocked — appalled, actually — at Evangeline’s bland designs, and quickly break into an advice-heavy song. Their message? Take some risks, have some fun, and crack the mold of social expectation. “Do what all good scientists do: experiment,” they sing. “Make it your motto day and night... Be curious, get furious at the attempts to hold you down.”

It’s tempting to see the song as a feminist call to arms, but the plot of Nymph Errant is thin as delicate lace and this bold assertion is merely a vehicle for a rousing array of musical dance numbers that move the young ingénue from one unlikely scenario to the next. Her adventures span the globe and include stops at the French Follies, a nudist colony, an Arabian harem, a Greek battlefield, and more. At every turn Evangeline encounters a former schoolmate who either rescues her from impending danger or introduces her to the slightly off-color ways of the world. At first, Evangeline is scandalized and implores her male suitors not to take advantage of her. As time passes, however, her sexual propriety is thrown to the winds. Or is it?  Remember please, that Nymph Errant premiered in 1933 — and in a twist that seems positively quaint, once Evangeline’s passions are stirred she begins a valiant campaign to lose her virginity. But never fear, each and every man she meets rebuffs her aggressive overtures. As a result, Evangeline avoids the temptations of Eden’s first Eve and — spoiler alert — remains a virginal princess for the fiancé who patiently awaits her return to staid society.

It’s silly. It’s preposterous. And it’s fun. The songs are filled with literary and cultural references that are often hilarious and the play is so well presented that it comes across as charming rather than dated. That it aroused the ire of polite society 79 years ago is amazing, but alas, tempers flared and the original London production was roundly condemned. Indeed, Nymph Errant did not cross the pond until 1982 and it has been performed only a few times in the 30 years since it arrived. That’s a pity since the songs are witty and clever. What’s more, as a look at mores of a bygone era, it not only chronicles the illusion of yesterday’s sexual decorum, it reminds us that queer culture was alive and well long before Stonewall.

To a one the actors are terrific, although Sorab Wadia, as Andre, Heinz, Constantine, and Ali; Andrew Brewer as Oliver and Ben; Natalie E. Carter as Haidee Robinson and Evangeline’s Aunt Ermyntrude; and Cady Huffman as Miss Pratt, Clarissa, Professor Krauthammer, and Mrs. Bamberg, are particular standouts. The five-person band, on stage at all times, is strong, and the staging by Will Pomerantz is perfect. While long, the show is well-paced and delivers a multitude of laughs.

Yes, it’s sexist by contemporary standards. But Nymph Errant is nonetheless an engaging romp. If you’re looking for an entertaining night out, it’s a safe bet.