Written and Directed by Jennifer Schlueter 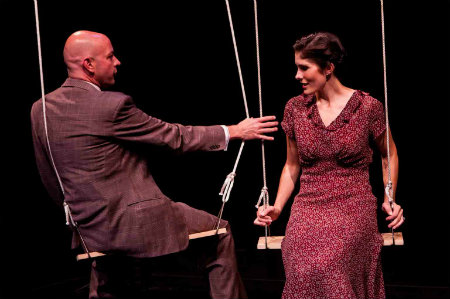 The historically inclined of you may remember Charles Lindbergh, the man who made the first solo flight over the Atlantic in the “Spirit of St Louis” in 1927. His heroic exploit not only took him from Long Island to Paris, but also launched him to immediate fame, fortune and a life of intense social activism. However, as you enter the stage of 59E59’s Theatre B, not a single prop evoking that exciting time for aviation can be seen. Rather, three delicate swings hang from the ceiling suggesting a rather feminine and romantic atmosphere -- not exactly what you’d expect from a story about the Lindberghs.

North, the brain child of writer and director Jennifer Schlueter, is a story of the lesser known Anne Lindbergh, the wife of Charles, and her struggles to find a meaningful life as an artist while reconciling the demands of an intense domestic life and the melancholy memory of a murdered child. She too was an accomplished aviator and author, and the story is based on an encounter she had with Antoine de Saint-Exupery (author of The Little Prince), who after writing the preface to one of her books, asks to meet her. While this encounter was historic, the Anne on stage explains that what we are about to witness is a “woman’s tale,” where fact takes a more secondary role in the narrating of her inner battles and emotions.

Anne, impressively played by Christina Ritter, is a woman with an almost childlike innocence and artistic sensibility. She is sweet and caring, seeing the world in a profoundly idealistic way, which often clashes with the brash and direct approach of her husband Charles (Kalafatic Poole). Her meeting with Saint Exupery (Christopher Marlowe Roche) has a deep effect on her and his imaginary presence often becomes the person she dialogues with when trying to make sense of the world around her. Through the accomplished script, the conversations between these two are simply wonderful, with the two artists deliberating about love, the responsibility that artistic talent brings, and their intense passion for aviation.

The scene design is quite minimalistic, and combined with some skilled lighting, does much to provide an atmosphere that reflects the character of Anne: her simplicity and “day dreamy” nature are made apparent in the way the actors make use of the swings and the space, often with gestures than evoke carefree children.

While I enjoyed many aspects of North, I do have some criticisms. Although I liked the way Saint-Exupery was portrayed, I felt he may have conformed a little too much to the stereotype of a romantic French artist: poetic in his prose (in spite of the awful accent) and a little too sensual in his interactions. And while I’m notorious in missing many of the subtleties fiction often provides, I think North may have lacked a more rounded and defined ending to give justice to the acting and script. If you want to explore your inner sensitivity (or need an activity for a charming and romantic date), then North could be worth checking out.