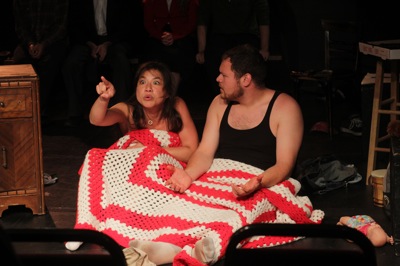 After teaming up this summer for the consistently funny and well-received production of The Virilogy, playwright Ben Clawson and director Artem Yatsunov have joined forces yet again for New. Tricks!, a show that is a combined effort between Horse Trade Theatre Group and Strange Dog Theatre Company. Much like The Virilogy, the show focuses often on sexual and dating-related humor and includes multiple stories. But whereas The Virilogy connected reoccurring characters New. Tricks! is mixed bag of different short one-acts combined together with one longer piece.

In the earlier pieces, Clawson explores black humor, showing characters that make such mistakes as threatening murder to avoid close contact with a squirrel, calling out their girlfriend’s mother’s name during sex, inquiring if an infant’s funeral should be shorter than an adult’s funeral, and imbibing rattlesnake venom in an attempt to get high. Scott Cagney, who starred in The Virilogy, aids the work with his knack for comedic skill, playing a bumbling boyfriend in two of the one-acts. Ming Peiffer also displays an ability for switching from comedy to drama as she plays the angry girlfriends. The merging of darkness and humor doesn’t always result in erupting laughter, aside from High as a Bite, in which two youths decide to gruesomely stab themselves and lace the cuts with rattlesnake venom, all in the hopes of getting “really stoned.” The zany comedic performances by both Annie Rutherford Lutz and Phil Corso aid the script’s over-the-top humor.

The play’s second act seems to be an odd pairing with the earlier offering of short pieces. Focusing on the story of a waterfall jumper, the work’s vision remains as of yet unclear, though its (predictably) tragic ending coincides with Clawson’s theme of disappointment and darkness. Cagney, thankfully makes the most of the work’s funnier lines, eliciting some laughter. Audience members who, like me, were charmed by The Virilogy won’t find the same streamlined humor here, although Clawson still displays an ability for imagining unusual scenarios. New. Tricks! feels like a work in process, but perhaps by culling the funnier bits and cutting away the lesser bits, Strange Dog can create another comedic gem.