Murder in the First 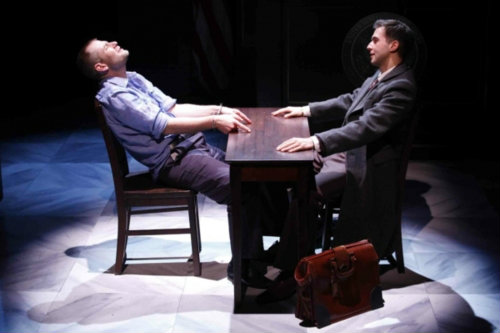 Chad Kimball and Guy Burnet in MURDER IN THE FIRST. Photo by Carol Rosegg.

Based on the 1995 film of the same title, Murder in the First chronicles the trial of Alcatraz inmate William Moore (Chad Kimball, from Broadway's Memphis) who was inhumanely kept in solitary confinement for three years before brutally assaulting a fellow inmate with a spoon (yes, a spoon: just one of many darkly comic details that are sprinkled throughout this stellar script).  But don’t enter 59E59 expecting a lame Law & Order-style courtroom drama. This is about more than Moore’s case. It’s about human beings. It’s about comradery.  It’s about love and fear and hope and everything in between.

The play takes place in San Francisco in 1941 and is inspired by an actual event. When attorney Henry “Hank” Davidson (Guy Burnet, providing a star-making performance in his U.S. theatre debut) is assigned to defend William Moore, he is fully aware that he’s supposed to lose. His boss (a hilariously stern John Fitzgibbon) has zero trust in Hank’s abilities and his brother (John Stanisci) is borderline condescending every time they converse. In fact, his girlfriend Mary (another lawyer, portrayed radiantly by Larisa Polonsky) may be the only one who thinks he stands a chance.

But what ends up developing between lawyer and defendant completely changes everything... between everyone. Watching as the relationship between Burnet’s Hank and Kimball’s Moore progressed, regressed, progressed some more, fell apart, and found its way again, I couldn’t help but think, “This is live theatre at its absolute finest.”  Both Burnet and Kimball, fully trusting in one another, give bold, emotionally-charged performances that are just as gripping as Dan Gordon’s writing and Michael Parva’s pitch-perfect direction.

The heart of the play lies within the character of Henry Davidson. Burnet presents Hank as a man who is relentless in providing justice for someone who is unable to realize that he even wants justice or freedom or a life. Hank will-not-stop until he succeeds and that is exactly why this play is a triumphant success. We are watching a character so maddeningly passionate that we as the audience become hooked (this is especially true during a transfixing courtroom scene in Act II). Burnet’s performance is astonishingly three-dimensional: naïve, intelligent, gallant, timid, rash, suave, adorable, fiery.

Just as brilliant is Kimball. His most raw, tragic moments actually arrive during his interactions with the play’s only two women. Watch as his Willie Moore is unknowingly inappropriate with Polonksy’s Mary. Or when a quick evening with a prostitute named Blanche (Antoula Katsimatides, who gives a very strong performance) goes awry because Willie would rather be held than receive a blow job. I haven’t cried during a theatrical outing since Next to Normal. Chad Kimball, as a decent man who’s lost his way, brought tears to my eyes.

Generally speaking, the play is a fascinating character study. The only subplot that fails to leave a noteworthy impression involves Hank and his brother Bryon. In a play which runs 2 hours 15 minutes, this trite family drama could be left out and nothing would be lost. Far superior are the scenes which include characters involved in the case, like Judge Clawson (played remarkably as a man patient-but-impatient at the exact same time, by Thomas Ryan) and Houlihan (a reporter played with slick-yet-slimy allure by Joseph Adams).

Enhanced by a sharp multi-level set by Mark Nayden, impeccable costumes by Tristan Raines, a lighting design that sets the mood given the different locales (dark & dreary in prison, light & exposed in court) and a sound design that is Music-to-the-Ears ideal, I have eight words for you: Get. Off. Your. Ass. And. See. This. Play. Okay, fine, nine words. Now!